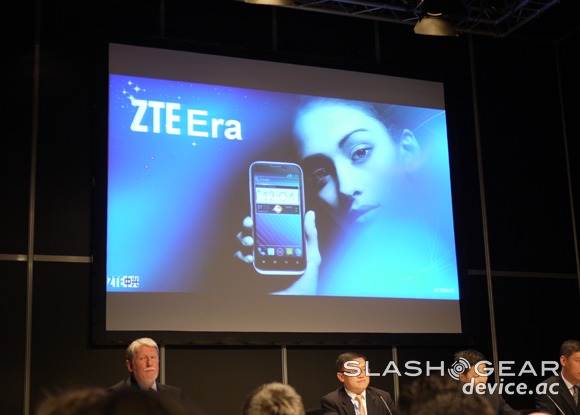 Quad-core smartphones certainly seem to be the recurring theme at Mobile World Congress this year. ZTE, usually known as a more conservative, budget OEM, just revealed their first quad-core device running Nvidia’s new 4-Plus-1 Tegra 3 processor. The Era is ZTE’s new flagship, though as far as hard specs are concerned it runs a little behind the pack with a 4.3-inch 960×540 display – if you care about those things, of course. It should be quite the looker, though: a 7.8mm-thin profile puts it squarely in RAZR territory.

Though the short glimpse we saw of the Era in ZTE’s press conference looked like a pretty stock Android phone, ZTE appears to be emulating the big boys in software as well: all its new phones will run the Miflavor (what?) interface over Android. At least it’s Ice Cream Sandwich underneath. There’s still a lot of work to be done on this element – the company says that its hardware is running Gingerbread now, but will get Ice Cream Sandwich by the time it’s released.

And they’ve got quite a while. ZTE isn’t planning on releasing the Era until the third quarter of this year – which, in terms of the mobile market, might at well be an era away. This being the case, the rest of the hardware specifications are still being ironed out. The only thing other than the processor and screen that the company has committed to is an LTE radio. Hopefully by the time the Era sees a worldwide release, Nvidia will have gotten over that compatibility problem. ZTE’s got a lot more to show here at Mobile World Congress, so stay tuned.