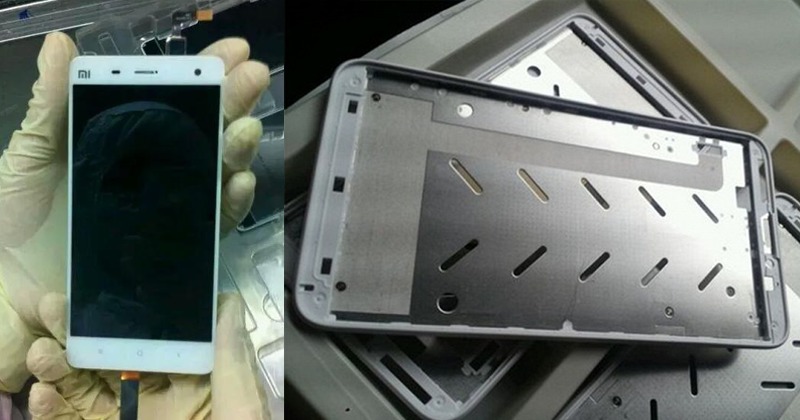 Rumors about Xiaomi’s new smartphone are coming in thick and fast, this time coming seemingly straight from the assembly line of the Chinese smartphone manufacturer. What we’ve had recently were some blurry monochrome pics of the front panel and a nondescript white back panel. So there is a bit more to share now.

To take a look at what we already know about what we assume will be Xiaomi’s fourth flagship phone which we think will be called the Mi4 – although interestingly, the Chinese blog sources are still thinking if this new phone will be called the Mi “3S” with the naming convention a la Apple. Much has been made about its rumored premium metal frame, and one of the new leaked photos will certainly point to that direction.

The source also mentions at the very least a 1080p resolution 5-inch screen (as seen in the photos), powered by a yet unnamed quadcore processor, although the choices seem to be either NVIDIA or Qualcomm – hopefully the latter’s spanking new Snapdragon 805s. The source also mentions a probable 13MP camera and 4G network capability. And if the pictures are anything to go by, it looks like Xiaomi is retaining the three physical buttons below the screen.

There were past rumors that the launch of the new flagship smartphone would likely coincide with IFA 2014 in September, but this source says that the unveiling could actually happen this month in July, judging from the advanced assembly line progress as seen in the new pictures. The sooner we get a look at this admittedly nice looking smartphone, the better it will be for all of us.