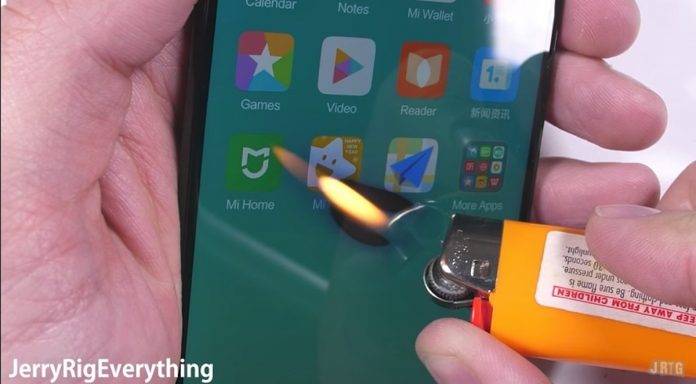 The Xiaomi Mi 6 was only announced a few weeks ago but Zack Nelson already managed to get a unit to scratch, burn, and bend. The Mi 6 was introduced with a 6GB RAM and Snapdragon 835 processor and has the potential to slay other more expensive rivals like the Samsung Galaxy S8, Sony Xperia XZ Premium, and Sharp AQUOS R. JerryRig Everything is interested in the Mi 6 because its predecessior, the Xiaomi MI 5, didn’t do well last year. It was actually placed in his “Shelf of Shame” and so he wants to know if the Chinese OEM implemented his suggestions.

As with any other durability tests, he starts with the scratch test using Mohs picks to test the screen. The Xiaomi Mi 6 scratched at level 6. This means it is durable and can survive car keys and coins when placed inside your pocket. The fingerprint scanner as well survived as it is hidden under a glass display. It is the same with the 8MP front-facing camera that is covered with glass so it is also scratch-resistant.

The metal earpiece is as flat as the surface of the screen so it delivers a clean look. The back panel is covered by glass so it doesn’t scratch. The rear cameras and flash are covered in glass as well.

As for the side of the phone, the Mi 6 is now covered with a harder metal that only scratches the surface but doesn’t destroy the build unlike in the Mi 5. There is no headphone jack nor a microSD card slot for storage expansion so those are minus points.

The IPS LCD display responds to the flame after ten seconds which is better than the Mi 5 responding after four seconds. When pressure is applied to the back, the glass back flexes a bit but is only temporary. It’s the same when being flexed from the front glass display.

In summary, this Xiaomi Mi 6 wins the durability test. It is a great improvement from the Mi 5 and definitely has the potential to beat the other higher-priced flagships. It can be king of the inexpensive flagships according to Zack Nelson but that is, if people go beyond the fact that there is no SD card slot and no audio headphone jack.