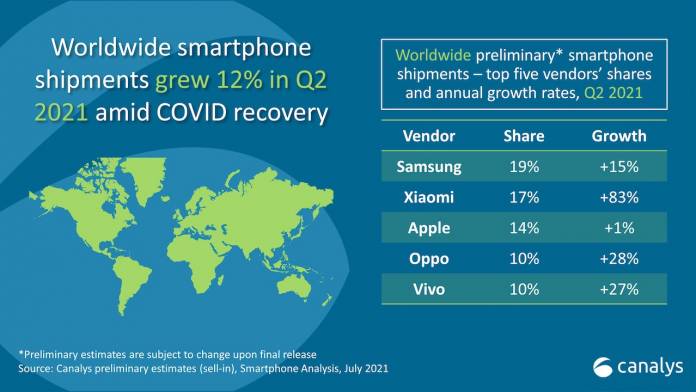 In Q1 2021, the market industry saw global smartphone shipments going up. It was better than last year. We saw Huawei being out of the top five circle. Still on top was Samsung followed by Apple. On third place was Xiaomi. For the second quarter, Apple is down to number three which means Xiaomi is now number two. The latest Canalyst report tells us things are getting brighter for the Chinese OEM that was once the mobile king before Huawei.

Huawei is not yet totally out of the game but we highly doubt its numbers will improve. Global phone shipments went up by twelve percent. Samsung held a 19% share of the total mobile phones shipped for the second quarter of 2021. Xiaomi followed close behind with 17%.

On third place now is Apple with only 14%. The first three brands held half of the total number of phones shipped worldwide. Vivo and OPPO followed in fourth and fifth place.

Canalys Research Manager Ben Stanton noted Xiaomi’s strong performance. He shared Xiaomi’s shipments “increased more than 300% in Latin America, 150% Africa and 50% in Western Europe”. He also noted that fact that Xiaomi is growing and evolving at the same time. “It is now transforming its business model from challenger to incumbent, with initiatives such as channel partner consolidation and more careful management of older stock in the open market,” Stanton added.

Xiaomi still caters to the mass market but we think Samsung and Apple should be more careful. Xiaomi sells phones more affordably by 40% and 75% than the two companies. Xiaomi just needs to work on its premium flagship offering. For this year, there is the Mi 11 Ultra and the Mi Mix Fold.