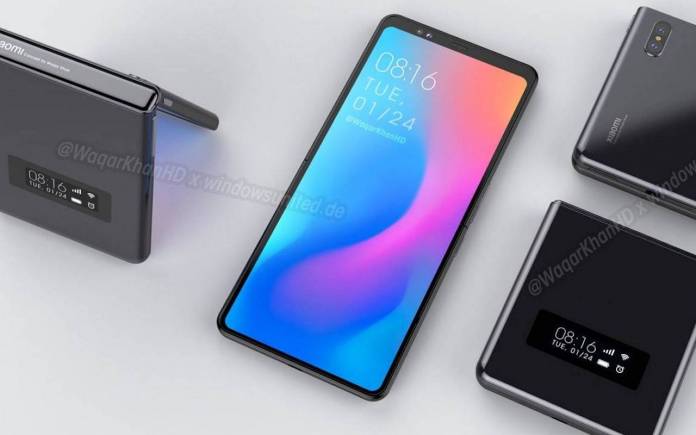 Is Xiaomi working on a new phone? The answer to that question is affirmative. Next question: Is it a foldable phone? Looks like it. Xiaomi is believed to be working on a new foldable phone that is similar to the Samsung Galaxy Z Flip. This means a foldable phone with a clamshell form factor. Xiaomi may be thinking a flip phone design may be something that is easier to make, market, and even sell. The Chinese OEM hasn’t ventured into this category but we can expect it to make a related announcement soon.

There is no official confirmation yet but some images of the concept Xiaomi foldable phone have been sighted. This is also not the first time we’re mentioning a flexi-foldable phone. We remember that one in a cryptic demo video in January last year. Its design was different though as shown by the renders of a device with an outward folding display.

Another set was rendered followed by a new Xiaomi foldable phone with a pop-up Penta camera system. There is no foldable phone mention yet this year until this week. A new set of image renders has surfaced online, showing a clamshell-style foldable smartphone.

The mystery Xiaomi foldable phone may compete with the Samsung Galaxy Z Flip and the Motorola RAZR. Xiaomi can take advantage of better research and development since the two phones aren’t exactly selling. If Xiaomi launches something better, then maybe it can get ahead of the competition, at least, in the foldable clamshell phone category.

The Xiaomi phone here looks more similar to the Samsung Galaxy Z Flip. It may come with flexible OLED displays like the Galaxy Z Flip. The image discovered on WindowsUnited was by Waqar Khan. It’s only a concept but the design was based on a series of patent filings by Xiaomi. Xiaomi is also believed to be sourcing the flexible display from LG.