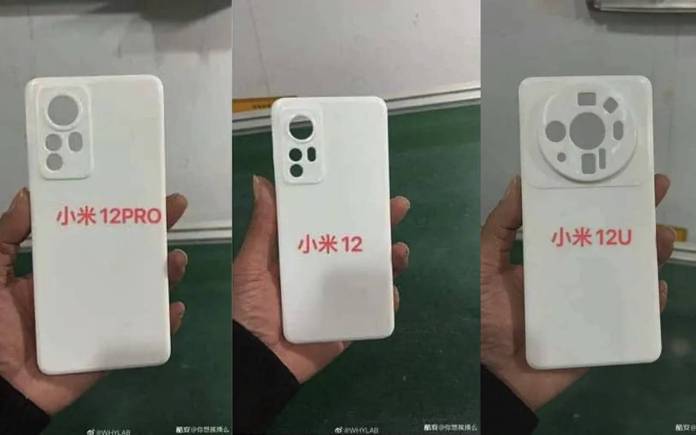 The Xiaomi 12 will be one the first few smartphones to run on the Snapdragon 8 Gen 1. We reported it will be official but Motorola went ahead over the weekend to reveal the Motorola Edge X30 running the same chipset. As for the Xiaomi 12, renders and details were leaked ahead of launch. There will be the Xiaomi 12 series which is believed to be introduced just before the year ends. Four variants may be introduced: the vanilla Xiaomi 12, Xiaomi 12 Ultra, Xiaomi 12 Pro, and the Xiaomi 12X. We have learned some information already but expect more details will be revealed until the official launch.

The latest we have is a set of images of protective phone cases for the Xiaomi 12 phones. These are covers for the trio so we have an idea how they actually look.

Looking at the images, the covers for the Xiaomi 12 Pro and Xiaomi 12 confirm the earlier designs that were leaked. Interestingly, the Xioami 12 Ultra appears to be different. The main camera may remind you of the Huawei Mate 40.

According to our source, there are eight holes. The middle one is said to be for the primary camera. The other holes appear to be for the LED flashes, other camera modules, and the periscope sensors.

Nothing is certain and official yet. We’re still taking things with a pinch of salt for now. We believe the Xiaomi 12 series launch is getting closer so we’ll watch out for related details or images that will surface. A December 28 launch was mentioned but only the Xiaomi 12 and Xiaomi 12 Pro could be announced. The Xiaomi 12 Ultra may follow in Spring 2022.