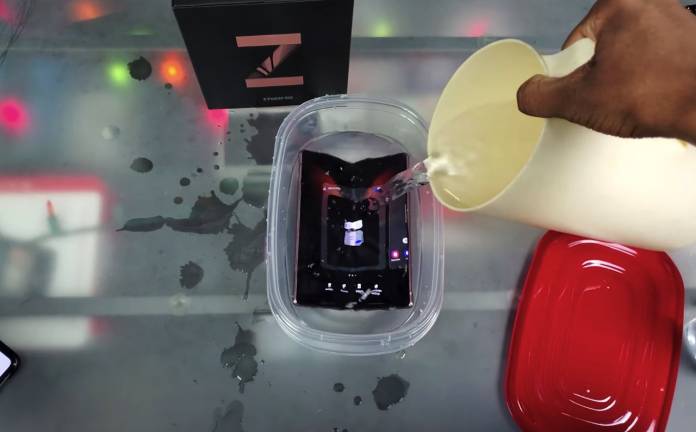 We regularly feature durability tests and teardown videos but we haven’t featured any more fun tests here. By fun we mean those drop tests or freeze tests we used to cover. They are basically the same. Most drop tests end similarly: the phones are destroyed. As for the freeze tests, some phones have survived. The last freeze test we featured here was that Coke Freeze Test featuring the Samsung Galaxy Note 7. Almost five years later, here is another Samsung flagship phone being kept inside the freezer–a Galaxy Z Fold2.

Actually, this is a month-old video. Latrell Jennings posted the Samsung Galaxy Z Fold2 Water Test & Freeze Test last month. Some of you may have probably watched this particular video. After being sub-merged in water for five minutes, the YouTuber placed the phone inside a deep freezer for 24 hours.

The first five minutes did nothing to the Samsung foldable phone. The phone was still functional. Nothing happened to the phone considering it doesn’t have any IP68 or IP67 waterproof rating.

The phone is not IP rated but it did survive being underwater for five minutes. The result is different though after being sub-zero for a whole day. The smartphone didn’t turn on. The battery run out.

Charging the Galaxy Z Fold 2 with a wireless charger didn’t do anything. It didn’t turn on. It’s the same with a wired charger–nothing happened.

We can say that $2,000 Android smartphone was busted. We’re not surprised. The lesson here is clear: protect your expensive phone if you want to have your money’s worth. Maybe get that official leather phone cover from Samsung?