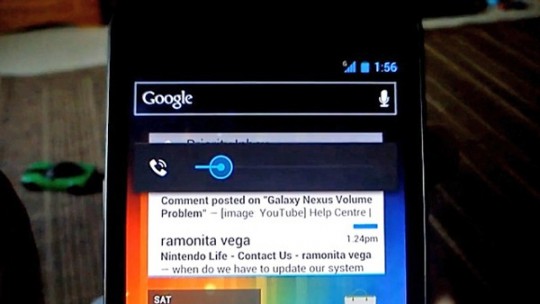 If you are a proud owner of a Galaxy Nexus smartphone and have been waiting with baited breath for the volume fix to land today is your day. Word is that the volume fix is being pushed out OTA today by Samsung. The roll out will be staggered according to Clove in the UK. Staggered would mean that not all users of the smartphone will get the update at the same time.

Oddly enough, the handsets that were expected to arrive with the volume issue fixed turned out to not have the fix applied after all. Buyers of the new devices that still have the issue will be prompted to download the update shortly after turning their new Galaxy Nexus on. Our own Chris Davies has a Nexus in his possession and has reported that the update isn’t available for him at this point.

The volume bug plagues Nexus devices that are running on a 2G network at 900MHz. Carriers in the UK commonly use this. This would explain why some users that are in areas with good 3G connections haven’t had issues with the bug. You can check out the review of the Galaxy Nexus to get a better idea of what the smartphone is capable of.