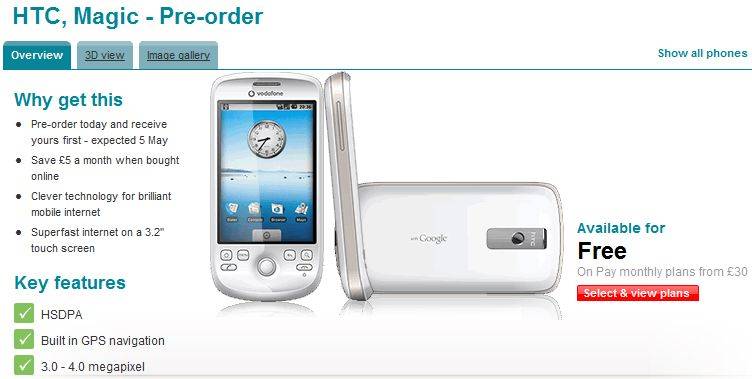 Vodafone UK have put the HTC Magic up for pre-order, with the touchscreen Android smartphone available from free depending on contract.  Launched back at Mobile World Congress in February, the Magic is HTC’s second Android device after the T-Mobile G1 (aka the HTC Dream).

According to Vodafone, the first deliveries of the Android handset should arrive on May 5th.  The Magic had been expected to launch on May 1st, itself a delay from the originally slated April release.  Monthly contracts costing £35 ($51) upward (over 18 months) get a free Magic; the cheapest contract is £15 ($22), with the phone then priced at £293.62 ($428).

The HTC Magic has a 3.2-inch capacitive touchscreen, 3.2-megapixel camera, GPS, HSDPA and WiFi.  Our hands-on video is below, and for the full gallery check out our MWC coverage.