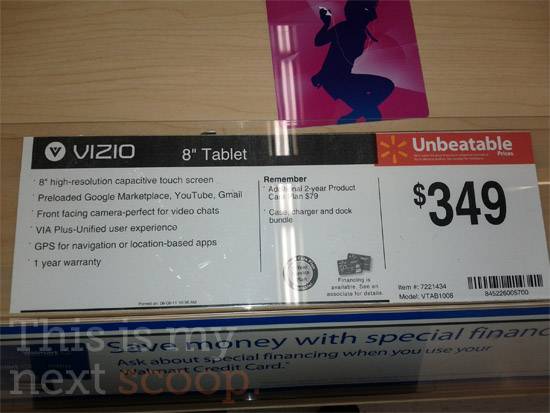 Vizio’s 8-inch tablet, the VTAB1008, looks set to land in Walmart sooner rather than later. The Android slate – which we saw Blake Griffin fondling yesterday – hasn’t been spotted itself, but the Walmart price card has been caught on camera by a This is my next tipster.

According to that card, the Vizio will be $349 and have a front-facing camera, GPS, VIA Plus for intercompatibility with the company’s TVs and other products, and access to the Android Market. We recently saw the slate cross through the FCC complete with AT&T 3G support, though there’s no mention of wireless connectivity on this Walmart model.

Vizio announced the “VIA Tablet” back at CES in January, alongside a similarly Android-powered VIA Phone, and promised a summer release. What’s unclear is whether Vizio has added Honeycomb to the tablet in the meantime, or if it will launch running a smartphone version of Android.