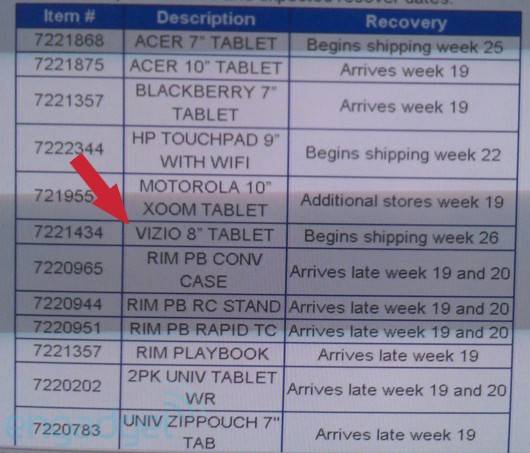 Vizio managed to take the HDTV market by storm and quickly moved to become the top brand of HDTV sold in the US beating out much more established rivals. Vizio is now set to try to do something similar with the tablet market and its interesting 8-inch Vizio tablet. You might remember that tablet; it surfaced on video not too long ago when Vizio hooked NBA player Blake Griffin up with a new home theater.

We also had a leaked photo of the shelf tag allegedly for the Vizio Android tablet this week with the price pegged at $349. What we don’t know is when exactly that tablet will hit store shelves. Another leak courtesy of someone working at Walmart has surfaced. This time the leak is a pic of the screen for the Walmart inventory system. The photo shows that the 8-inch tablet will ship in week 26.

That is 6 weeks from now apparently so you have a month and a half to wait for it to land. It might be a hard wait with other cool tablets on the market, but if you want to use the Vizio tablet with your Vizio home theater this tablet and its low price will make it very appealing. I also like the stereo speaker system that Vizio uses that lets you have stereo sound in either orientation.