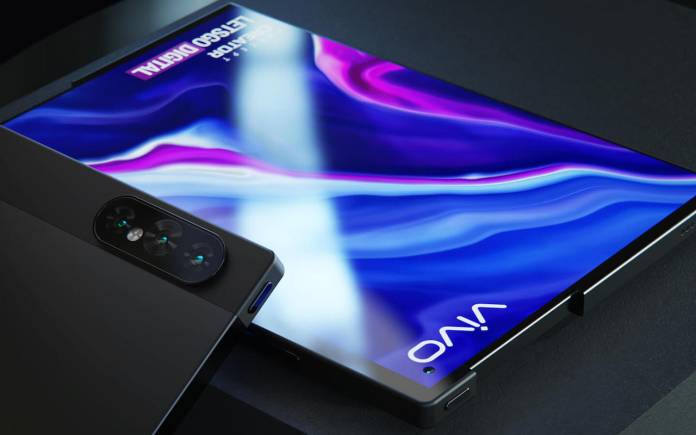 It seems more OEMs are getting into the unconventional displays category. Samsung is now reigning supreme in the foldable phone market but may soon be challenged by other brands like Xiaomi, Huawei, and OPPO. We can look forward to other forms factors like more clamshell phones or maybe even tri-fold designs. The rollable phone idea has been presented earlier but nothing has been released commercially yet but we’re hoping a working one will be revealed soon. That could happen as Vivo has been mentioned to be working on a rollable smartphone.

Only a patent has been filed but we’re hoping it will become a reality in the near future. A Vivo rollable smartphone sounds ambitious but it’s quite similar to the OPPO X 2021.

There will be the Oppo Find N, Huawei Mate V, and the Xiaomi Mix Flip. Nothing is certain and official yet but the Vivo NEX Fold may follow with an 8.2-inch display.

No, it won’t be the Vivo tri-fold foldable phone yet. Like OPPO, Vivo has been working on its own foldable smartphone. A patent was filed with the World Intellectual Property Organization (WIPO) last May 26 but it was only last December 2 that is was published.

The patent mentions a Vivo smartphone with a pull-out display and roll-up screen. The width of the display is extendable. The result it a tablet-sized display. Basically, the Vivo rollable phone is similar to the Oppo roll-up smartphone. That one didn’t go into production.

The Vivo rollable phone will look like a regular smartphone in its compact form. When the display is rolled out, it will look more like a tablet. The phone comes with a rotating axis inside together with a rail system. Completing the system is a support plate for the flexible screen.

The phone shows a punch-hole selfie camera on the top right corner. On the rear, there are appears to be three cameras, an extra sensor, plus a flash. There are physical buttons on the sides–volume keys and the power button.

The Vivo rollable smartphone will remind you of the OPPO rollable phone. Perhaps the design is close but Vivo’s version is more likely to be released anytime soon.