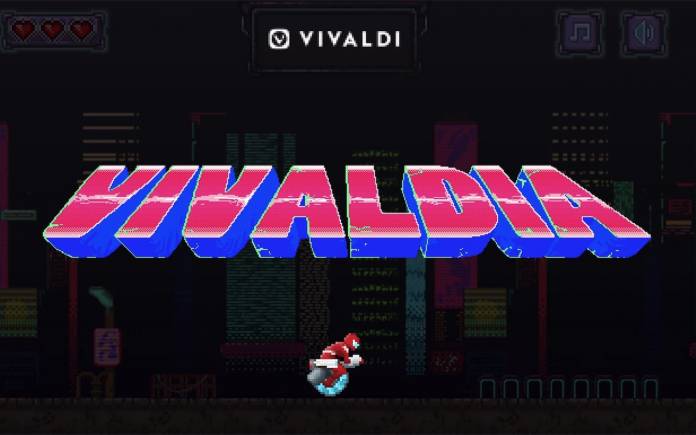 Built-in games on browsers are nothing new. Perhaps our most favorite is the T-Rex runner game that shows up on the Chrome web browser when there is slow or no Internet connection. The next one that you can enjoy when you’re bored out of your wits is this–Vivaldia. It is a new built-in arcade game within the Vivaldi browser. The 80s style makes it attractive especially to those who were born in that era. It’s another game they can introduce to their kids.

Don’t expect any smooth graphics because everything is pixelized. It will take you back to the early days of video gaming. Vivaldia is an arcade-style adventure where the hero is set to fight evil and claim back her city.

Vivaldia is playable on most platforms like Windows, Linux, and Mac. It can be played whether offline or online. You can also play it on your Android smartphone, tablet, or Chromebook. If you have a gamepad, you can also play the game as such is supported.

Vivaldi CEO Jon von Tetzchner shared: “Our goal with Vivaldia is not only to give users a great fun game in the browser but to tell our own story – about how Vivaldi is taking the technology behemoths head-on and continues to crusade against the concentration of power that lies in a few global corporations.”

Vivaldi teamed up with Porcelain Fortress, an Icelandic game development company, to work on this game that has the hero riding her CyclePunk. The goal is to outsmart and outrun whatever big evil machine comes her way to save her city. The game is now downloadable from HERE. It is now version 3.4 so make sure your Vivaldi browser is always updated.

It was only last year when Vivaldi finally released the Android mobile browser. Another update was released before going out of Beta and was made available for smartphones and tablets.

A few months ago, a Vivaldi update delivered dark mode for web pages. Another one also brought a better bottom bar and improved privacy options. Last month, Vivaldi 3.3 was released with customizable address and tab bars, as well as, full-page blocking support. Looks like the Vivaldi team is serious about improving the browser with all the new features and updates being introduced.