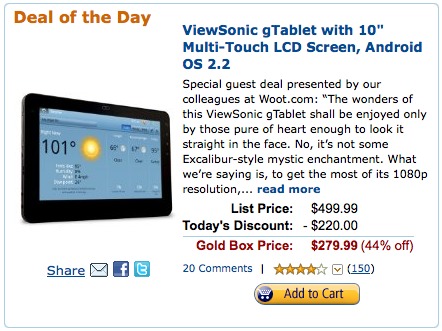 I’m going to keep this short and sweet, as this was recently for sale at the same low price of $279 on woot.com . It is a great tablet for the price but it looks like woot didn’t sell them all, because now Amazon has it as the deal of the day for the same price. (Shipped & Sold by Woot).

Thew Viewsonic G-Tablet is the first dual-core Tegra 2 tablet to launch. It features Android 2.2 with a custom UI over the top of it. It has a huge following on XDA forums because it was the first dual-core tablet to be released. It is a great device for someone looking for a cheaper tablet, or can’t afford the expensive Motorola Xoom . My only issue was the terrible screen on the G-Tablet, it had bad viewing angles and made things hard at times, but it is very fun to use and I enjoyed it until I got my Motorola Xoom.

I do have some good news, Pershoot the extremely popular kernel building for many phones like the Nexus One also has kernels for the G-Tablet and has just released his latest kernel. You could get the G-Tablet for $279, overclock it to 1.6 Ghz and have the fastest Android tablet on the market. What a deal. Check out the entire G-Tablet kernel thread here, or get his latest release from droidbasement.

*Update: Apparently they overclocked to 1.6 Ghz and it was able to run benchmarks, but they’ve not released that kernel yet. For now the latest kernel supports overclocking the dual-core Tegra 2 inside the G-Tablet to 1.4 Ghz. Next update should take things higher.

**Double Update That Kernel is available here: Check it OUT!