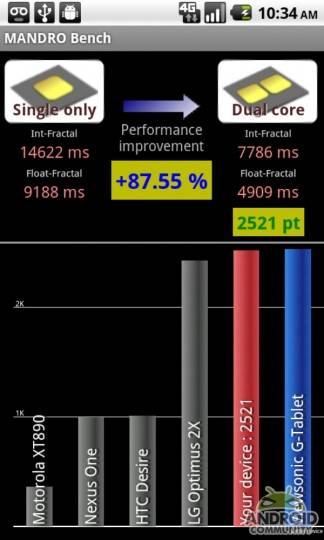 So a few minutes ago we were going ahead with some benchmarks of this brand new T-Mobile LGx and what did we find sitting right next to our result on MANDRO bench? That pesky Viewsonic G-Tablet! So we went hunting to find out more and what do you know? Those mad maniacs over on XDA developers have been at it again, overclocking their devices until they explode, and this time it’s the Viewsonic GTab. XDA user pershoot played around with the kernel until his device set its rockets for stunning and blasted off into outer space – GTab style!

This developer had the throttle at full, hitting a whopping 1.6 GHz – it was scaled down because of UV being applied to 1.4 GHz, but hey! That’s still pretty sweet, eh? First benchmarks have added up to be 57.657 on Linpack, 3088 on Quadrant, and 4433 on Smartbench. Sound pretty sweet? Run the kernel yourself!

But remember, this kind of stuff can really mess your beloved device up, royally. If you don’t know what you’re doing, you’re probably going to make it explode, or worse, brick. Take a peek back at the original thread to get all the info you need on making this masterpiece float.