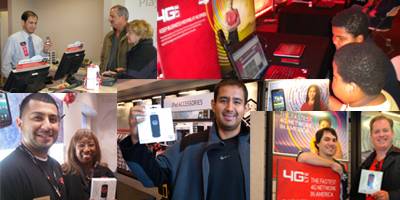 Verizon’s 4G LTE coverage, the fastest 4G in the west, is coming to several new cities this week. Verizon made the announcement as a series of Twitter messages. The cities include Pensacola, FL; Mobile, AL; Denver, CO; Montgomery, AL; Gainesville, FL; Tallahassee, FL; Philadelphia, PA and more. The coverage officially begins on Thursday, May 19th.

The covered cities may be seeing occasional 4G LTE coverage now, but probably not a steady signal until Thursday. With the DROID Charge just released on Saturday, Verizon now has two 4G phones in its lineup. Back on April 27th, Verizon’s 4G LTE Network went down nationwide just a day before the Charge was to be released, and the Charge release was delayed for over two weeks.

There is no question that Verizon’s brand of 4G is the fastest, and our own Chris “Burnsy” Burns was impressed with the 4G performance when he did a review of the DROID Charge.

4G Smartphones, Modems And Hot Spots Arrive On The Verizon Wireless LTE Network In Pensacola, Florida, On May 19
PENSACOLA, FL — Starting Thursday, Verizon Wireless customers in Pensacola will be able to surf the web, download files and share music and photos up to 10 times faster than before with Verizon Wireless’ 4G Long Term Evolution (LTE) network.

The network launches on May 19 and will be available to customers in the following cities and towns:

Pensacola, Fla.
“We are proud to help Pensacola residents, small businesses and local government connect faster and more fully with each other and those outside our community,” said Kay Henze, president of the Houston/Gulf Coast region for Verizon Wireless. “Our 4G LTE network is revolutionizing the way people communicate, and we know this connectivity will be a key communications and technology enabler for many years to come.”

Residents of Pensacola can choose from an array of devices that have already launched to access the blazingly fast speeds of the 4G LTE network, including:

In real-world, fully-loaded network environments, 4G LTE users should experience average data rates of 5 to 12 megabits per second (Mbps) on the downlink and 2 to 5 Mbps on the uplink, so customers in the Pensacola area can enjoy the fast speeds of the world’s first large-scale 4G LTE network. Verizon Wireless began introducing the globe’s first large-scale LTE network on December 5, 2010, covering more than 110 million Americans, and is quickly expanding national coverage. In addition to expanding five new markets, the company is adding nine new markets this week, for a total of 55 metropolitan areas covered. The company is rapidly building out its 4G LTE network, and is on course to deliver 4G LTE to its entire 3G wireless footprint by the end of 2013. In addition, the company is working with rural communications companies to collaboratively build and operate a 4G network in those areas using the tower and backhaul assets of the rural company and Verizon Wireless’ core 4G LTE equipment and premium 700 MHz spectrum.

When customers travel outside of a 4G coverage area, the devices automatically connect to Verizon Wireless’ 3G network, enabling customers to stay connected from coast to coast. Verizon Wireless’ 3G network is the most reliable network in the country, allowing customers with laptops and smartphones to download and use cool apps, from mobile social networking platforms to GPS-enabled maps, rapidly browse the web to keep up with news, sports, stock quotes, Hollywood gossip and more, work on-the-go with fast file sharing and stream must-see video and customized radio stations.