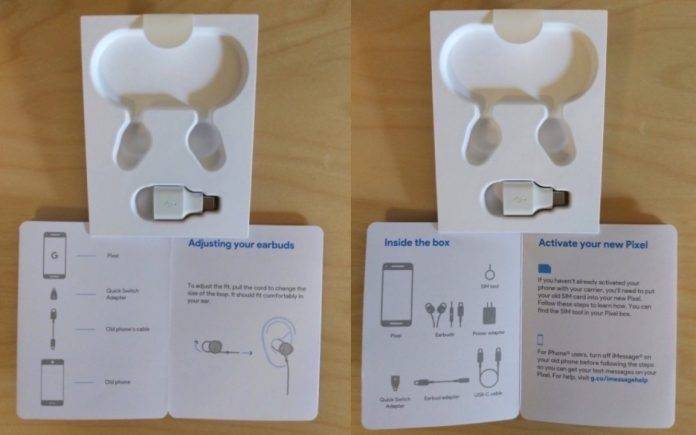 The Pixel 2 and the Pixel 2 XL are the latest premium flagships from Google. They are pricey alright but unfortunately, they don’t come with a pair of earphones unlike the other flagships today. The company has introduced the Pixel Buds separately at a cost. The price is no joke at $159 which is roughly the price of a budget-friendly, entry-level smartphone.

The Google Pixel Buds offer real-time translation with Assistant and Translate and will work with the Pixel and Pixel 2. Interestingly, one person who ordered a Pixel 2 from Verizon received something he thinks isn’t supposed to be there. Inside is an empty place in the box for earbuds.

The packaging and Quick Start document show that the Pixel Buds were perhaps considered to come free with the phone. We’re guessing there’s some kind of mistake here. It’s not really for the Pixel Buds but for some sort of a wired pair. The pair appears to have a USB Type-C connection and inline controls. The design appears to be similar to the Pixel Buds but that pair isn’t fully wireless. There are short adjustable loops that allow a perfect fit for the user.

A headphone dongle is supposed to be part of the package but Lucas Everett, the person who received the wrong box, had to request for a new one. We don’t know what happened here but the Verizon store said the other Pixel 2 boxes don’t have such booklet or tray inside.

So who’s fault is this one? We’re not sure but does it really matter? What we’re more interested now is the fact Google considered to add a pair and yet ditched the idea.