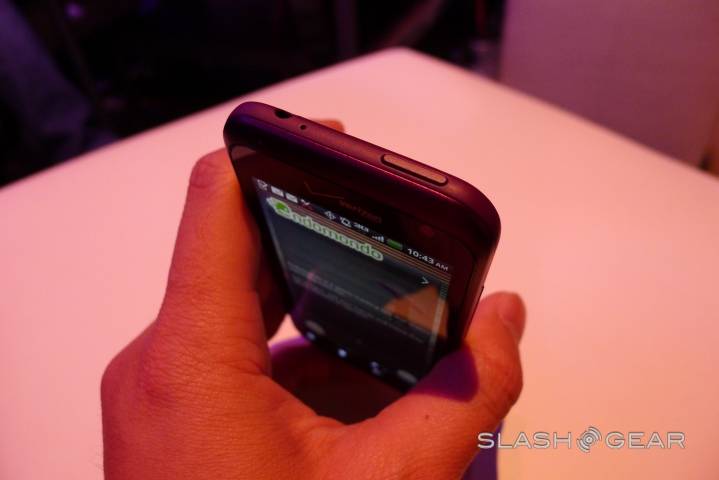 What we’ve got here is a rather feminine device created by HTC to appeal to those who love to be fashion forward and have a bit of a unique coolness to their smartphone. Much in the same way the bright red version of the HTC Inspire 4G, the HTC Rhyme (here in its Verizon iteration) aims to spice up more than just the specifications inside the phone – the exterior aesthetic here is enhanced, made to work with the way the user and the device interact visually. And it finally, finally brings the “charm” to the USA with a little light-up square that lets you know you’ve got a notification. Japan Kawaii, here we come!

I’m actually surprised the team at HTC didn’t call this the HTC Kawaii, as cuteness is certainly the centerpiece here with the Rhyme. It’s also a bit strange that it doesn’t have “Beats” integration given its name and the fact that HTC recently hooked up with Beats officially, but we wont dwell on that for long. Plastic and metal components all around, soft plastic on the back and a construction that reminds us, strangely, of a first-gen HTC device – and that’s not a bad thing. 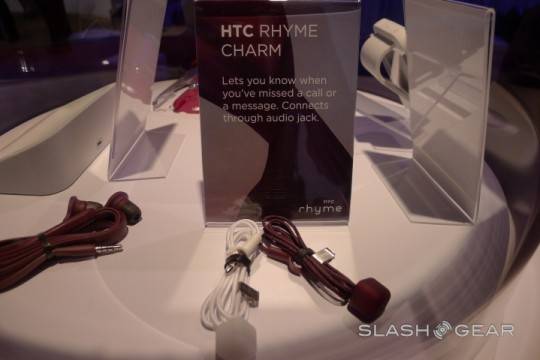 This device is clearly made to be a full package, with wired stereo headset, Bluetooth headset, and charm all ringing true with the same cool Plum coloring. The charm, like the headset, must be plugged into the headphone jack to work, acting as a simple tell-all for activities as they happen – got a new message? Bright lights for you! The desk cradle is one of the more clear plusses of this entire combination, appearing to be a desktop accessory noone would be opposed to employing. 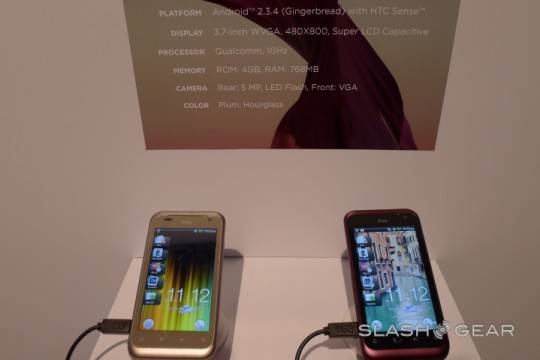 Inside and out this device doesn’t exactly scream “new”, a single-core 1GHz Snapdragon, WVGA LCD display and 5MP camera with single LED flash leading us to believe that this device isn’t aimed at early adopters, but rather a new generation of smartphone users looking to get in to the game with something that looks rather nice. On the other hand, this device is the first to show off the new HTC Sense 3.5, glossy and impressive as always. The simplified widgets and tabbed shortcut bar are there, (like you’ve seen in the leaked version perhaps), as are some excellent dynamic icons that chance based on updates to apps. 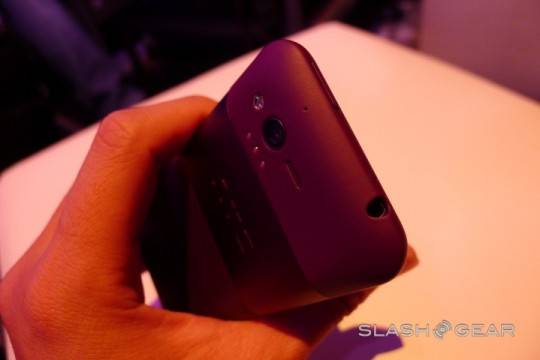 The newest update to HTC’s camera app includes 2.5s in burst mode, auto backlight correction, and automatic upload to a user-designated Facebook gallery, amongst many other options you may have seen in the last few impressive HTC camera app releases. That said, in combination with a fairly decent (though not top-class compared to its 8-megapixel cousins) camera makes this device a definite lead-in to other HTC devices. You’ll also notice that this device doesn’t ONLY come in Plum, there’s a sort of silver/white combo for those that love a White Wedding more than they want Purple Rain.

What we’ve got here is a mid-range contender that’ll likely appeal to a younger crowd and will take, as all good smartphones should, the feature phone selection at Verizon to lunch (and not leave a tip!) Have a look at our hands-on video as well as photos galore above and below. We’ll also be reviewing this device soon.