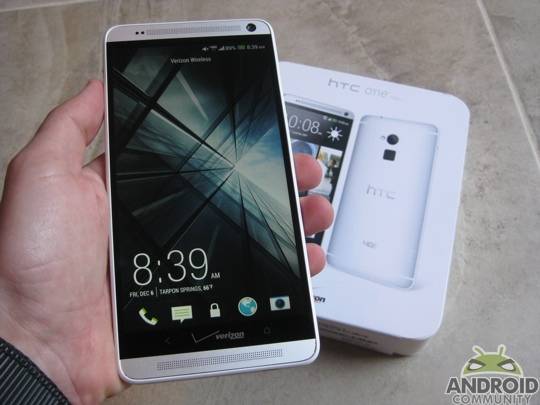 Following a long series of rumors and leaks, HTC announced the One max back in mid-October. Verizon Wireless followed HTC with an announcement of their own and initially said the handset would be arriving in time for the holiday shopping season. True to their word, the HTC One max arrived with Verizon in late-November. Anyway, we have recently been carrying a Verizon branded model and as such, wanted to offer a bit on this carrier variant and how it compares to the model we reviewed back in October.

The HTC One max is mostly made of metal, though there is some plastic. There is a plastic ring that runs around the phone and also plastic strips where the removable back over sits. The mostly metal construction does have one perk in that it makes the phone feel solid. But on the flip side, that metal construction also adds to the weight. The One max weighs in at 7.65 ounces (216.9 grams). In comparison, we recently reviewed the much smaller, but still heavy in the hand, Moto G and that weighs in at 143 grams. Simply put, there is no mistaken the One max being in your hand, or in your pocket or bag.

Aside from the weight, the phone does have a premium feel. Granted, it is not quite as nice as the feel of the regular sized HTC One, but it is a step above some of the plastic construction we are seeing these days. On the front you have a 2.1 megapixel front-facing camera and a pair of speakers which sit above and below the display. Those also mean that HTC BoomSound is present. 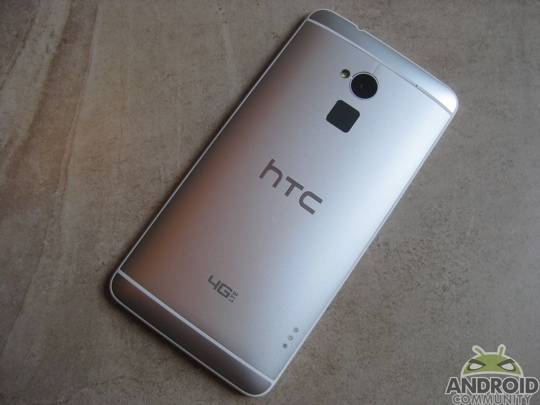 Flipping over to the back and we find the camera lens, fingerprint sensor and a set of pogo pins. The camera has an LED flash and is the UltraPixel we saw announced with the HTC One. The pogo pins are used for accessories, such as the Power Flip Case which packs an additional 1150 mAh battery and is available from HTC. Otherwise, the bottom is where you will find the microUSB for charging, the top has the IR sensor and headphone jack, the right side has the power button and volume rocker and the left side has a toggle that unlocks the back cover.

The Verizon One max has 32GB of internal storage as well as a microSD slot with support for cards up to 64GB in size. The memory card slot is tucked away under the removable back panel, though, unlike the panel itself, the battery is not removable. In this case the battery is 3300 mAh. HTC and Verizon suggest this means up to 25.5 hours of run time and in our experience — we had no trouble with the battery. In fact, we easily made it through a full work day with juice to spare.

Other hardware includes a quad-core 1.7GHz Snapdragon 600 processor with 2GB of RAM. Needless to say, the One max was a solid performer in our day to day use. And in some instances, above average. One example is video watching, not only are you getting a large 5.9-inch 1080p display but you also have those front-facing speakers.

The handset also has dual-band WiFi, Bluetooth 4.0, GPS, NFC and as we have seen Verizon rolling out, the One max is Isis Mobile Wallet capable. Lastly, while HTC did include the BoomSound, they dropped the Beats Audio in the One max.

We mentioned the weight of the phone earlier in the post, but still needed to touch on the overall size. The box the handset ships in is rather small, or at least average sized compared to other smartphone packaging. But when you open the box — the phone sort of jumps out given the size. There is no denying this is a big phone. With a 5.9-inch display, this is almost more tablet than smartphone.

We included a side by side shot of the Galaxy Note 3 and One max to give some reference here. The One max is a good bit larger than the Note 3. The Note 3 weighs in at 5.92 ounces (168 grams) and interestingly, as compared to the One max, only has a display that is 0.2 inches smaller. The One max display is 5.9-inches and the Note 3 display is 5.7-inches. 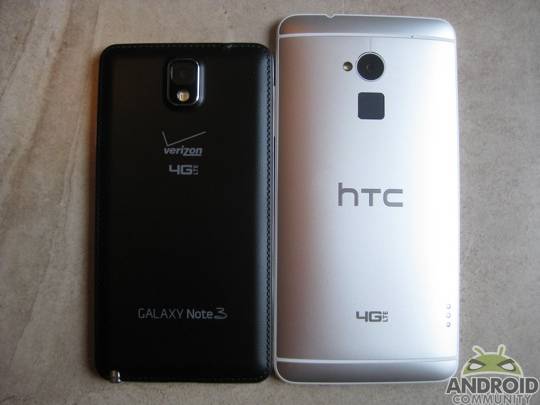 Bottom line here, those considering a One max purchase should prepare themselves for the size. While this may be a turn off for some, there is some positive points here. As a tablet fan, this actually made for a nice device. It had me leaving the Nexus 7 behind as it was good for reading and video watching. But on the other side, this is a phone that people are going to notice. Holding this up to your head, or even setting it on a table will have people talking.

That brings another point, given the size, this is not really easy to fit in your pocket. It does fit in a front or back jeans pocket, but it is bulky, noticeable and often sticks out the top.

A hot topic is carrier branding on the outside of the phone. Unlike some of the terrible decisions we have seen from Verizon (home button branding) in the past, the HTC One max is relatively clean. The backside has the 4G LTE logo sitting centered towards the bottom. There is also the HTC logo on the back. Flipping over to the front and you’ll find a Verizon logo sitting centered between the capacitive back and home buttons. There is also the Verizon Wireless mention on the lock screen. That one sits up towards the top, but goes away with an unlock. These examples are shown in the gallery sitting below.

The software experience is the same as when we originally reviewed the phone a few months earlier. That is to say Verizon has launched the HTC One max with Android 4.3 and Sense 5.5. So far we haven’t seen any timeline of an update from Verizon. As far as Android skins goes, HTC does a rather nice job with Sense.

You have the perks such as BlinkFeed and HTC Zoe as well as the IR blaster which works with the HTC TV app. The Jelly Bean and Sense experience was solid and largely the same as what we experienced in our original review. But alas, as with any carrier branded smartphone — there are the pre-installed apps to contend with. 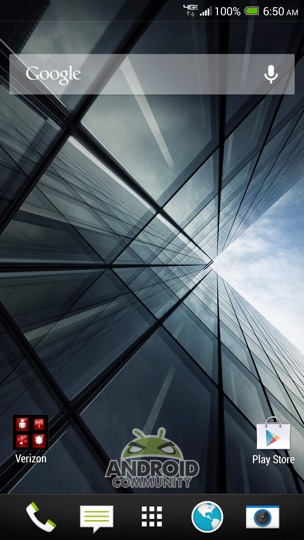 The image sitting above offers a look at the homescreen just out of the box. The gallery sitting below takes you through the pre-installed apps. The setup is fairly clean looking, but that is due to the use of folders. There are just a few rows of apps, however there are five folders with even more. Verizon has these broken down into Amazon, Google, Media and Tools. As well, there is the Verizon folder which includes nearly a dozen additional apps.

In the end, there isn’t much we can do about pre-installed apps at this point. For better or worse, the carriers are going to load them up and Verizon is no exception to the rule. Thankfully, they take up little space in terms of storage and can also be tucked away in a folder to sort of hide them.

We did cover the fingerprint aspect in detail back when we originally reviewed the One max, but given we weren’t fully pleased or convinced, we gave it a solid second look. Needless to say, there are still issues. Overall, the setup process is simple and easy. HTC takes you through the process step-by-step and there really isn’t any reason this could not be setup even by the most novice of users. 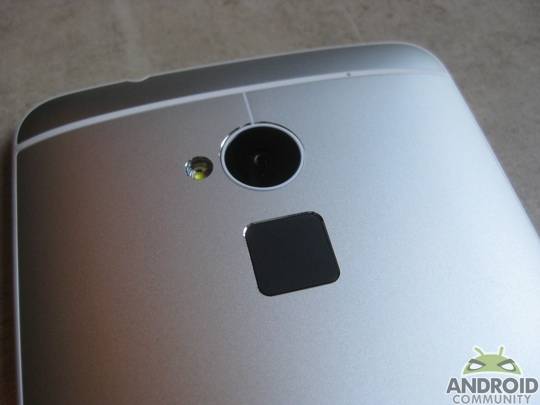 The issues come after the setup has been done. You see, the setup process has you carefully scanning your fingerprint making sure to run it straight over the sensor. That worked well enough, however in real world use our finger was scanning at an angle and therefor not reading properly. Basically, if you are picking up a One max and planning to use the fingerprint sensor — try to make sure you scan your finger the way you plan to in real world use.

Some other points here include being able to set this to work with up to three different fingerprints for different functions. And yes, you can have it unlock the phone and also launch an app with a single finger swipe. Aside from the camera, you can set these to go to the home screen, launch the Voice Assistant or choose something from your list of installed apps. And as a fail safe, HTC also has you setup a password as a backup.

As for us, we setup and tested the fingerprint sensor, but beyond that we turned it off and went to a more traditional way of securing the phone. Other methods available include Face Unlock, Pattern, PIN and Password.

The HTC One max has support for the Verizon LTE network and while the speeds are going to vary from market-to-market, we haven’t seen much to complain about. We ran 6 tests over 4 days and with one exception we saw speeds above 30Mbps. The one slow day had speeds at 14.63 down and 6.68 down. Slower than normal for Verizon LTE in the local area, however still more than acceptable for mobile. On the flip side, in two different tests we topped out with 39.03 down and 19.64 up.

If your handset purchase is coming down to carrier and network speeds, we would suggest finding a friend or loved one and convincing them to allow you to borrow their phone for a few moments. You wouldn’t need it long, but you will need to download and install the Speedtest app. The app is free and the test takes just about a minute to complete. Because in the end, regardless of how nice a phone appears to be, if the connectivity is lacking, the overall experience will be poor. 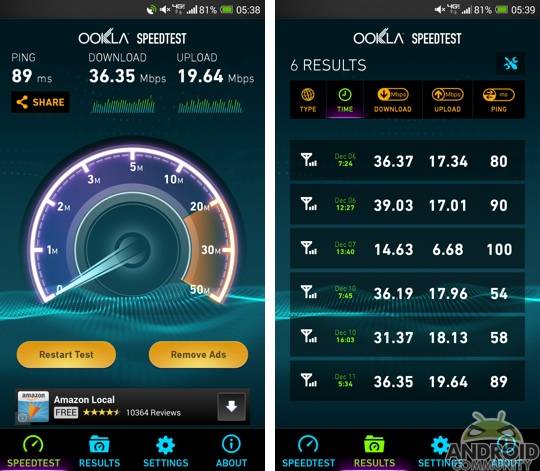 What can we say here, the HTC One max is a big phone. In our use we found we treated it more like a connected tablet as opposed to a smartphone. All of our voice calls were made using a headset, either wired or wireless. As a regular tablet user this meant for a good overall experience. The One max has a solid display and is a solid performer. It excels at tasks such as video watching, reading and gaming. But on the flip side, it isn’t quite as easy to put in your pocket or otherwise carry around. Our advice here, consider your usage and maybe even take a trip to a local Verizon store to check this one out in person.

Verizon Wireless currently has the HTC One max priced at $299.99 on a two-year agreement. Alternatively, the handset is $25.22 per month using Verizon Edge or $599.99 to purchase flat out. All that having been said, there are some additional images sitting in the gallery below.