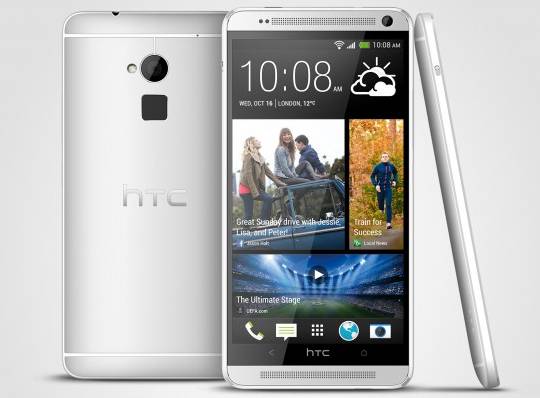 Coming as an end to what seemed like a never-ending series of leaks and rumors, the HTC One Max has been officially announced. As the recent rumors had implied, HTC had an announcement event and the One Max is now official. Similar to having advance knowledge of the announcement, these specs and features are going to sound familiar to those who had been following along.

Basically, that is to say HTC has unveiled the One Max with a 5.9-inch display and Qualcomm Snapdragon 600 processor. The fingerprint scanner is on the backside of the handset, and it will arrive running Android 4.3 Jelly Bean with HTC Sense 5.5. The display is 1080p and the processor is quad-core clocking in at 1.7GHz. There will also be 2GB of RAM and a 3300 mAh battery.

In addition to the internal (and non-removable) battery, HTC is also releasing the handset along with a flip cover that has a built-in 1150 mAh battery. Unlike the regular-sized HTC One, the One Max is sporting an additional feature. The handset has a microSD card slot with support for cards up to 64GB in size. In addition to the potential for added storage using a memory card, the handset will come with options for either 16GB or 32GB internally. HTC and Google are also offering 50GB of Drive storage for One Max users.

The fingerprint scanner on the back is dubbed the “Fingerprint Scan” feature and HTC is pushing this as one that will bring a new era of convenience and advanced functionality. Basically, this will allow the user to lock/unlock the device and also quickly launch up to three apps by assigning an individual feature to each.

The camera setup includes a 2.1 megapixel on the front and an UltraPixel on the rear. HTC is touting this one as bringing “ultimate imaging” and has features to include HTC Zoe mode, full 1080p video recording and Dual Capture which means you can grab a pic using the front and rear-facing camera simultaneously. Otherwise, some HTC goodies such as Video Highlights, BlinkFeed and BoomSound will be included. As well the front-facing speakers.

HTC will have the One Max available in Glacial Silver and the global roll-out is set to begin shortly. HTC has said availability will begin from “mid – end October” though at this point we have yet to see any market or carrier specifics.