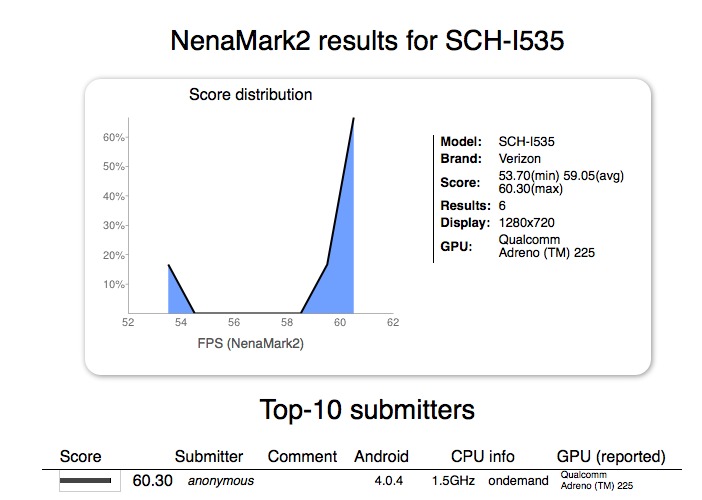 Samsung’s still playing hard to get with American versions of the Galaxy S III, but a pre-announcement leak of a user agent profile gave us a pretty good indication that the phone is headed for Verizon eventually. Add this little bit of evidence to the pile: Recombu spotted a Verizon-branded Galaxy S III in the NenaMark database, complete with the same SGH-I535 model number seen in the previous leak. As expected, this version of the phone uses Qualcomm’s Snapdragon S4 dual-core processor instead of Samsung’s own quad-core Exynos.

The results are impressive, with frames-per-second in the graphics-based test hanging around the same high-50s mark that we saw on AT&T’s HTC One X (also with a Snapdragon processor). The GPU tested in this unit is the Adreno 255, again, the same silicon inside the LTE version of the One X. The top end of the test had the phone running at a smashing 60.3 frames per second, something that’ll be hard to match for other phones.

For all intents and purposes the American versions of the Galaxy S III should be identical to the international version, except in the areas of processor, radio and whatever software customization US carriers insist upon. That last point is a significant one – just ask any AT&T customer eager to mod the One X with a locked bootloader. Timing can’t be guessed at the moment, though Samsung thinks that its flagship will reach American shores in late summer. Keep your fingers crossed.