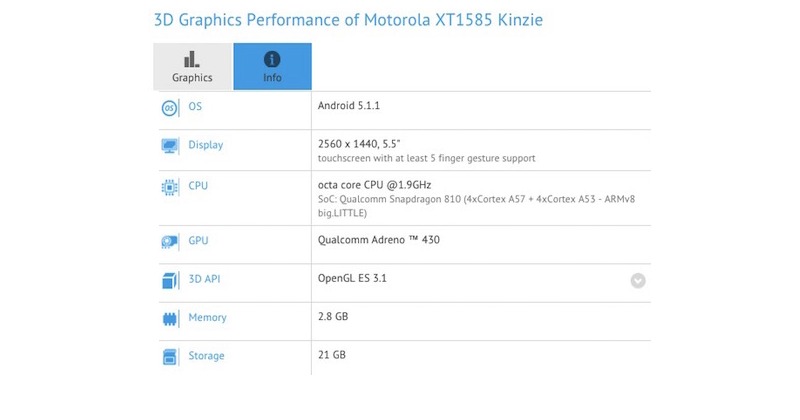 Aside from the Moto G 2015 version, Lenovo-owned Motorola is now also working on new DROID phones. We have limited information on the future handsets but a recent GFXBench benchmark gives us an idea about the Motorola XT1585 Android phone. Also known as the Motorola DROID Kinzie, this upcoming smartphone is bound for Verizon only so it’s an exclusive deal.

The Motorola DROID Kinzie is said to feature a 5.5-inch Quad HD display, a 20 megapixel rear camera, 4.5 megapixel front-facing camera, 1.9GHz octa core Qualcomm Snapdragon 810 CPU, 21GB of built-in of 2.8GB RAM (round off to 3GB RAM), some 21GB built-in storage which could still be 32GB. This “Kinzie” is just one of the new DROIDs in the works as there’s also the DROID “Clark”, the one powered by a Snapdragon 808 processor and comes with a smaller 5.2-inch Quad HD screen.

We can expect the DROID Kinzie to run Android 5.1.1 Lollipop as it’s the latest version of the sweet platform so far. We don’t have much details on the DROID Clark but at least we have an idea about the specs of the Kinzie and that it’s going to be the more powerful variant.

No images have been shared yet but give the geeks a few more days and we’ll see some renders or leaked images spreading around the web.