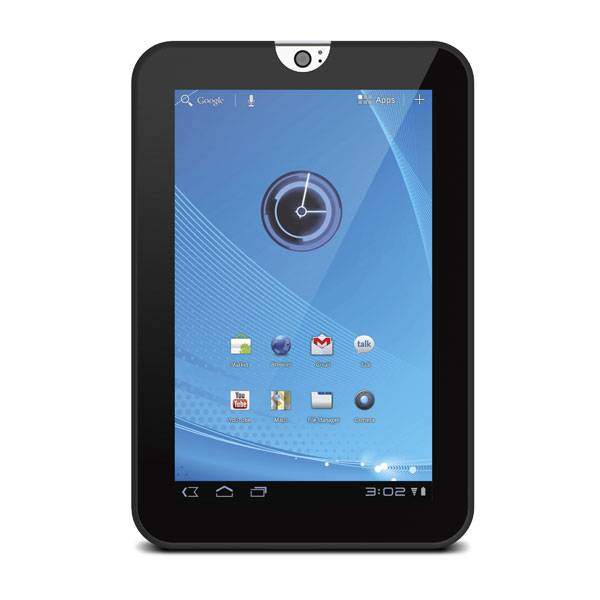 I’m sure there’s at least one person out there who absolutely loved everything about Toshiba’s 10-inch thrive Honeycomb tablet (even the headache-inducing commercials) except for its to-inch size. Well rejoice, One Guy, because the long-leaked 7-inch variant is available from Toshiba now, and should be hitting US retailers in the near future. The 16GB and 32GB versions will set you back $379.99 and $429.99, respectively.

Under the hood you get the same 1Ghz Tegra 2 dual-core process and 1GB of RAM, speedy enough to handle the vanilla Honeycomb 3.2 interface with ease. The display is an impressive 1280 x 800 pixels, matching competitors like the T-Mobile Springboard and the upcoming Galaxy Tab 7.7 for resolution and density. Expansion options are varied, with a mini USB port (not micro USB), HDMI out and MicroSD card support, plus a physical lock switch. Unfortunately a proprietary port is the only way to charge and sync, and that probably means no trickle charging from a computer, either. WiFi is the only way to access the Internet, but the junior Thrive does feature Bluetooth 3.0. It inherits the rather chunky profile of its big brother, and Toshiba claims six hours of battery life. Built-in apps include Kaspersky, Silvercreek’s suite of board games, MOG Music, QuickOffice and (sigh) Need For Speed Shift.

Don’t break out your wallet just yet, folks. Aside from the fact that the excellent Samsung Galaxy Tab 7.0 Plus lies right in between the 16GB and 32GB models as far as price goes, Toshiba’s razor-thin Excite tablet is expected in February of next year. If portability and weight is a concern, the new model will definitely beat out the Thrive, though the battery life issues experienced on the former may still be a problem.