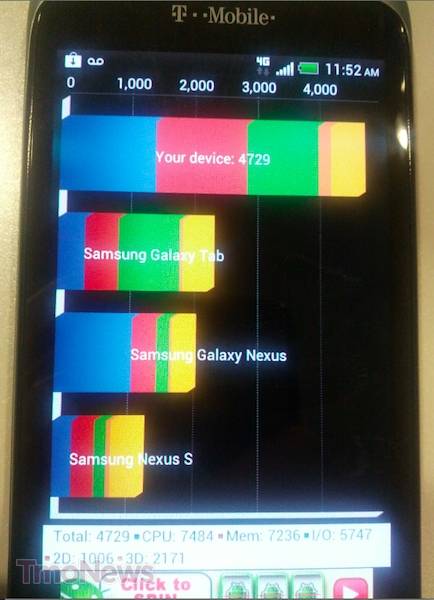 The HTC One series is all the rage at the moment in the Android world, and the T-Mobile’s getting the exclusive American version of the One S, the middle child with its own set of charms. We’ve already given the One S a full review and a thorough run down as far as benchmarks go, but TmoNews has a few photos of T-Mobile’s version in the wild. It’s rumored to be coming April 22nd, so a few devices are bound to be in manager’s hands at the moment – looks like we won’t have to wait too much longer.

In the standard Quadrant benchmark, T-Mobile’s version of the One S gets a score of 4729. That’s way, way above the typical Android smartphone, but curiously it’s also about 10% below the results we got when testing the international version of the One S. Interestingly, the Qualcomm Snapdragon S4 processor in both One S models outscored the Nvidia Tegra 3 in the One X by a considerable margin, despite the former being dual-core and the latter being quad-core. Quadrant probably isn’t optimized for multi-core tests, but even so, it’s a surprising revelation.

Other details noted by TmoNews include the fact that Magenta’s version of the HTC One S will be a decidedly blue hue, as opposed to the red-on-black international version. The black phone will be available some time after the April launch. Beats headphones won’t be included in the package (though Beats audio processing is loaded onto the system) but will be offered at retail, like some of the European sellers were promoting. Hopefully there’s just a couple of weeks left, T-Mobile customers – you excited?