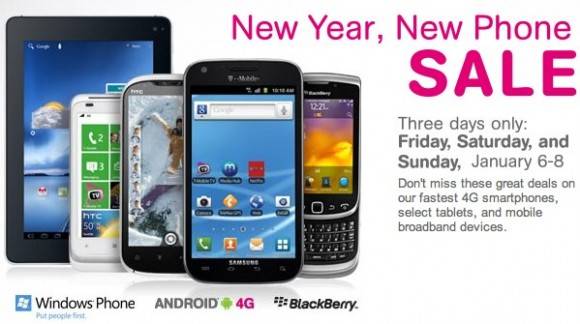 There have been a few sales going on over the holidays, but it looks like T-Mobile is out to beat them for the new year. The carrier is preparing a sale for this weekend, from Friday, January 6th through Sunday, January 8th. The sale is (perhaps not by coincidence) scheduled right before CES 2012. If you’re in the market for a few specific Android models, you’ll want to pay close attention. Without a doubt, the highlight of the sale is the current leader in T-Mobile’s lineup, the HTC Amaze 4G, which will be reduced from $229.99 to just $49.99.

Other highlights include the T-Mobile Springboard (AKA the Huawei MediaPad) and the LG G-Slate for the same price. The G-Slate in particular is handy if you’d like a tablet with a mobile Internet connection, especially if you’re handy with a custom recovery, since it’s a favorite for Android modders. The LG MyTouch Q, a pretty decent mid-range phone, is free. Of course, all these prices are contingent upon a new contract. Just for the sake of completeness, I’ll mention that the Windows Phone 7-powered HTC Radar and the Sonic 4G hotspot are on sale for $49 and free, respectively.

Of course, with CES and Mobile World Congress right around the corner, you might want to hold off on any rash purchases. Not only will better models be coming down the pipeline very soon, but these phones and tablets will probably be discounted when the newer ones are released. Still, if you’re eligible for a discount for a new or renewed contract, it’s a very good deal on the high-powered Amaze 4G. Read our review if you’re on the fence.