Of course, this one is expected: T-Mobile making another announcement soon after Verizon launched its new unlimited plan. Yesterday, we told you about the Verizon Unlimited as the mobile carrier’s newest plan that brings unlimited data, text, and calling within the United States. Today, T-Mobile has just improved its T-Mobile ONE plan by adding HD video and and 10GB of high-speed Mobile Hotspot data–at no extra cost. It’s free for all T-Mobile ONE subscribers.

Unlimited data isn’t exactly new but last year, Verizon scrapped the plan. PopData was introduced in late 2016 as a new service that brings unlimited data for 30- and 60-minutes. Verizon is bringing back the all unlimited data but this time, expect it to be better with LTE Advanced that brings 50% faster peak speeds and more hi-res streaming. T-Mobile said Verizon’s announcement only proves that they are worried about being in a close fight with the “Un-Carrier” especially after OpenSignal’s State of Mobile Networks in USA report was released last week.

Verizon and T-Mobile are neck and neck for Speed but T-Mobile has overtaken Verizon in 4G speed. Verizon’s 4G availability is more reliable though at 88.2% but T-Mobile is very close trailing behind with less than points. Meanwhile, T-Mobile’s announcement tells us that it is definitely watching Verizon. We’re sure of that but we’re interested more in how this Un-Carrier is planning to take on the challenge. As always, John Legere, T-Mobile’s President and CEO at T-Mobile is confident with his statements.

T-Mobile is also adding a new deal of two lines on T-Mobile ONE for only $100. Feel free to upgrade your plan or add two more lines for such amount beginning February 17, Friday. If you’re currently on T-Mobile ONE, activate the new features online or on your T-Mobile app. The 10GB high-speed Mobile Hotspot data can be enjoyed ASAP. 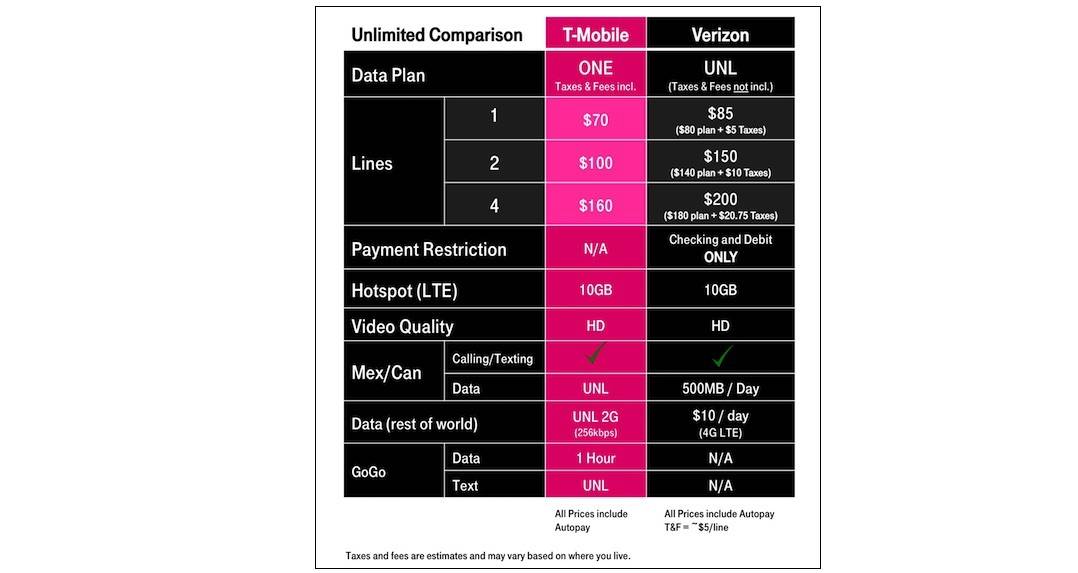