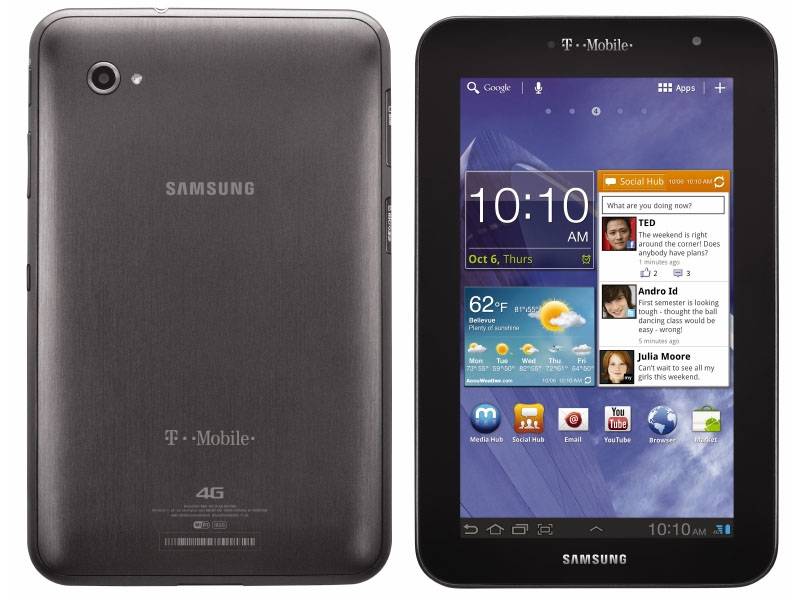 Hot on the heels of the 7-inch Springboard, T-Mobile is adding yet another tiny tablet to its lineup of connected devices. The new Samsung Galaxy Tab 7.0 Plus will be available with T-Mobile “4g” bands, starting on November 16th, the same day as the Springboard. Prices start at $249.99 for a subsidized tablet on a two-year data contract, minus a $50 mail-in rebate. Contract-free pricing has not been announced yet.

As a 7-inch Honeycomb tablet, the Galaxy Tab 7.0 Plus will compete directly with the Huawei-made Springboard on T-Mobile. In most specs they’re roughly equal, including a 1.2Ghz dual-core processor and 16GB of internal memory. The Springboard has the Samsung tablet beat on display, however, since its 7-inch screen is 1280 x 800 to the Tab’s 1024 x 600. While the Galaxy Tab 7.0 Plus gets Samsung’s TouchWiz UI over Android 3.2, the Springboard runs a stock version of Honeycomb… for the most part. Be sure to read our review for the details.

Both tablets come with a bit of a catch as far as the pricing goes: in addition to $50 rebates and data packages starting at $30, T-Mobile is counting the $249.99 price for the Galaxy Tab and $179.99 price for the Springboard as “down-payments.” Customers will be charged another $10 every month for 20 months to pay for the rest of the tablet over a two-year contract. That brings the total price for the Samsung Galaxy Tab 7.0 Plus to almost more than $500 over a two-year period, not counting data fees – the 16GB Wifi version, for comparison, is going for $399.