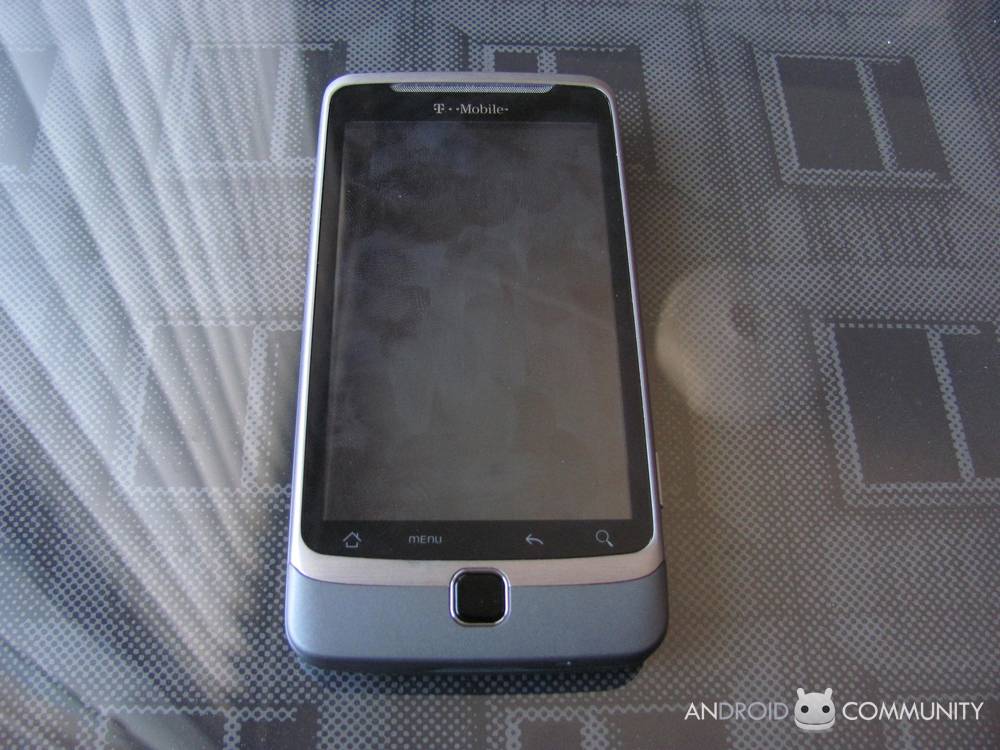 Welcome to the Android Community review of the fabled T-Mobile G2. Truly a lovely little piece of work with a Snapdragon MSM7230 processor, Android 2.2 Froyo, 4G speeds, and what I’ll tell you right now is a very nice still camera situation. Before you read this review, I’d like to encourage you to hang a left over to the Unboxing and Hands-On post for the G2, reading there all about the hardware details and feel of the device.

Dimensions are 4.68” x 2.37” x 0.55”; Display: 3.7”; and it weighs in at around 6.5 ounces. 4GB internal memory with pre-installed 8GB micro SD card, expandable to 32GB, stereo Bluetooth 2.1/EDR/A2DP, works on both UMTS/HSPA+ (dual-band) (Bands I and IV), and it’s a Quad-band GSM world phone: 850/900/1800/1900 MHz. There’s a touchscreen, trackpad, and QUERTY keyboard complete with customizable keys. 3.7” WVGA Super-TFT screen display and Qualcomm® SnapdragonTM MSM7230 processor. 5 megapixel camera on the back with digital zoom (silly,) autofocus, and LED flash. The camera is also a HD camcorder with 720p video capture with autofocus.

On top is the headphone jack and power button, right is the button to activate the camera as well as a switch that releases the cover for the battery in back. The battery cover as well as the battery compartment look really fabulous – I think this is the most attention I’ve ever seen payed to the design of something that’s hidden 99% of the time. Inside you’ll find the giant battery blocking everything, once removed revealing relatively easy to access SIM car and the pre-installed 8GB Micro SD card (expandable to 32GB). As I said in the unboxing, some people might not be thrilled having to go this deep to change/replace these cards, some people prefer they be this far out of sight. Your call. Again moving to the outside of the phone, on the bottom there’s essentially nothing, on the left is the USB jack as well as the volume up/down button.

Pressing in sort of an up and over movement on the left side of the phone reveals the keyboard. All backlit with four rows of keys with QWERTY instantly and alternate characters (like numbers) available upon pressing the ALT key. Several interesting additions to this keyboard are: the “www. / .com” key, dedicated @ symbol key, and three user-definable shortcut keys.

Now if you’ve been following the news about the G2, you’ll notice there’s some talk about the strength of the hinge. I must assume that the looseness of the hinge problem has been fixed since that talk began, because this phone’s hinge is tough. When I first attempted to open the phone, if you’ll take a look at the unboxing/hands on video, I basically had a rough time doing so because it was tightened to such a degree. I’ve been using the phone for about a week now and the hinge has loosened up to a tiny degree, but it’s definitely not loose in a way that I’m worried about. Two or three years down the line with heavy use: maybe.

Pre-note: I’m going through this phone as if I’d never touched a piece of Android equipment before in my life. I’m doing this because I feel as though many of the looks at this machine are from the perspective of an Android addict. This is alright most of the time because quite often when a person starts in on Android they don’t end up stopping at one device. On the other hand, there are going to be lots and lots of people starting in on the brand right here, from this device. Thusly, let’s take a look from their perspective.

From the moment this machine turns on, it’s sharp. The people that worked on this machine have design sense and layout sense, that’s for sure. They know how to interact with you, and they know how you are going to interact with the device. Or at least, they know how you’re going to end up interacting with the device when you see the controls. There are seven screens accessible from the onset, flicking back and forth, left and right, allows you to access them. On the bottom of the screen on the left and right are dots which indicate how many panels are to your left or to your right, and weather you’re in landscape mode or portrait mode is decided by having the keyboard extended or shut.

Each one of these panels has the ability to hold an array of apps, except screen 6, which holds 2 large rectangles containing Twitter and Facebook updates. It’s interesting how integrated these two services are to basically every single phone on the market these days. Also pre-loaded are such brands as YouTube, Photobucket, Gmail, and the sorts of apps every smartphone has like camera, gallery, email alternative, and the web browser. Something that’s not on every smartphone is the App Loader, accessible by pressing the grid key at the bottom center of the screen.

This App Loader is magnificent in both it’s looks and it’s function. You can keep every app you’ve got here on this screen (automatically alphabetized,) and access them from here as well, or you can press and hold an icon to place it out on one of your home screens. Simple, accessible, very very pretty.

You’ll find many if not all apps to be quite easy to access and navigate, especially if you use Google products outside of the phone. Many things are intuitive, like Maps (which is essentially Google Maps), which upon opening shows you a medium-range map with you in the center, placing you exactly where you are in the world GPS-wise. From there all you’ve got to do is enter the address you’d like to go and press Navigate. Presto, you’re on your way with that lovely lady speaking with you about the way you aught to go.

There’s multiple fun ways to search for items through Google including Google Goggles, Voice Search, and the always efficient typing of words. Games and other apps are quite easily found and purchased through Android Market. The game I used to compare playability to other phones is, of course, Angry Birds, and I’ll go ahead and say it plays as good or better than the iPod Touch version. Seems smoother somehow. Killing more pigs in a slightly more smooth manner.

Moving in and out of applications is slick. I recently did a review of a BlackBerry device and found it difficult to navigate on a very basic level. The situation here is basically the opposite. The buttons in the software and the buttons in the hardware are intuitively placed by designers who’ve obviously tested this device both on pro Android users as well as newbs. Speeds are fast all around, no more needs to be said about that.

Entering the App for YouTube, finding a video that can display itself in HD and pressing the HD button will tell you everything you need to know about the video capabilities of the G2. It’s not the best in the world, but it’s certainly excellent, and if you’ve never seen video on anything but a TV or computer monitor before, you’re going to be impressed by how well this device performs.

The speaker system goes loud enough that I’d be able to listen to some tunes in a room, just so long as there isn’t much other noise in the room going on. That’s talking about the speaker on full blast, no external speakers connected. Plug it in to a 3rd party device using the headphone jack and you’ve got a device that performs as well as any other on the market.

The camera is amazing. Once I began using it, I couldn’t stop because not only was the quality close to that of the point-and-shoot camera I’ve got, it had the capability of sending those photos to Facebook instantly, and that’s excellent. Taking video is just as slick as still photos, just flip the switch from the photo camera icon to the film camera icon and you’re ready to go. Options like switching video quality are all along the left (or the bottom, however you look at it,) and it looks great. Take a look at this very good puppy of mine wearing a squirrel costume, a photo taken with the still camera: 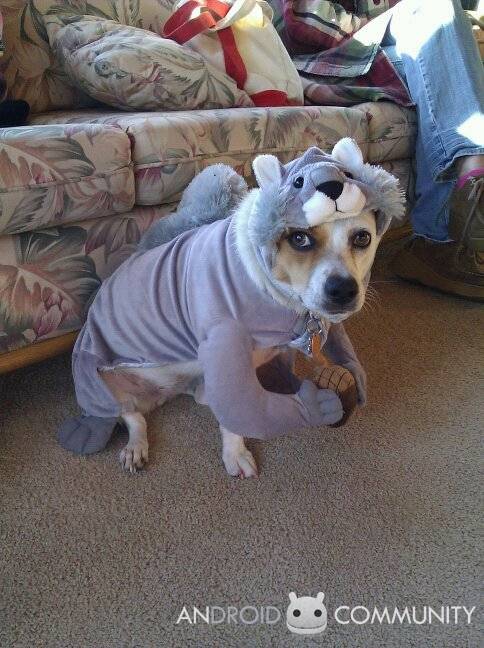 From the inner Twin Cities to the top-left of Minnesota, Fargo and back down to Saint Cloud, this device never lost its signal until deep, deep within the woods. Really I did bring it deep into the woods, as that’s where my wife’s parents live, and that’s where we did go to visit, but also on a (super secret!) testing mission for this phone. The battery lasted for days when only playing games, calling, and texting, then for 1.5 days of heavy usage of internet and video and all those big ticket items.

This is the phone I reach for now. I’ve got several phone lying around, all of them connected to the internet and capable of calling and texting (most of them here because I’ve reviewed or are about to review them,) and this is the one I constantly put my hand on first. It does have a little bit to do with the fact that I’ve got to give it back soon, but a lot to do with how fun and easy it is to use.

I hear tell that there are stronger all-round Android phones on the market today, (read the last two paragraphs of this HTC Desire Z Review,) but if you’re in the store and you’ve got your tendrils wrapped around this device, especially if you feel the need for the keyboard and have a love for Android devices, this’ll do the trick. If you’re brand new to smartphones, you’ll be wowed. Not only will you be wowed, you’ll never be able to go back to the life you once had, so very long ago.

Take a look at the gallery below and again, whip back to the unboxing and hands on post to see sassy video of this in my hands.