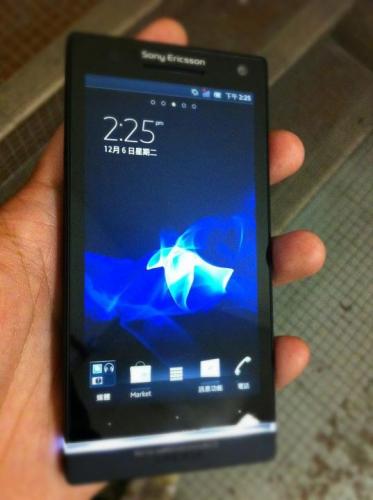 The Sony Ericsson XPERIA Arc HD has surfaced again today in a quick spyshot from what seems to be Hong Kong. We saw just yesterday a leaked press image of the device, and most noticeable is the glowing ring that paths around the bottom. The softkeys are definitely there, but the glow is probably just for looks – and that’s fine by me. From this new image, it’s safe to say the Arc HD will come in both black and white models.

There’s no doubt this is going to be one thin device. It may be rocking Sony’s modified UI over 2.3.5 (Gingerbread) at launch, but since it’s expected to debut during CES 2012 maybe we’ll see a quick upgrade to 4.0 (Ice Cream Sandwich). However, if you take a really close look at the status bar, you can see some icons that look surprisingly similar to those found in ICS on the Samsung Galaxy Nexus. It’s a tough call.

If you’re unfamiliar with the specs of this future Sony Ericsson handset, let me give you the rundown: It will sport a 1.5GHz dual-core (Snapdragon?) CPU supported by 1GB RAM, a 4.3″ 720p HD display, and a 12MP rear-facing camera. Yes – I’ll say that again – a 12MP rear-facing camera. Due to the continuous recent leaks of the Arc HD, maybe it will see the light of day before the year is up. Who knows?