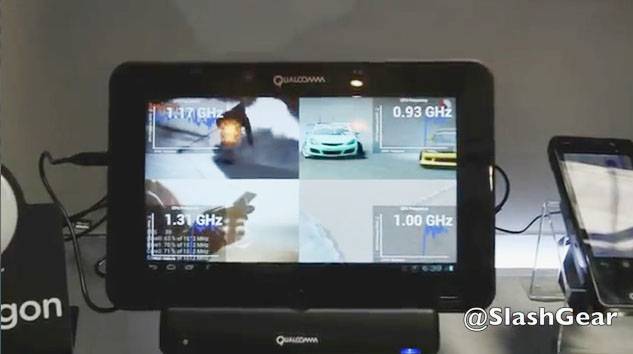 We got a preview of Qualcomm’s upcoming quad-core Snapdragon earlier in an official video, but being the sneaky and distrustful jerks that we are, we couldn’t believe it. So when we passed by Qualcomm’s booth at Mobile World Congress, we made a beeline for the Krait  demonstration. Lo and behold, the prophecy had been fulfilled: four 720p videos, running concurrently on four cores, off of a mobile processor. The results were so pants-wettingly impressive that we had to whip out a camera and document it right then and there.

Qualcomm is a little behind in the “core race”, with the Krait architecture expected to come some time in the second half of 2012, a good nine months at least after the Nvidia Tegra 3. That said, the performance on display here makes it look like it will be well worth the wait. In the meantime, Tegra 3 isn’t an option if you want LTE connectivity; in the case of the HTC One X and Asus’ newest tablets, LTE versions are instead opting for Quialcomm’s dual-core Snapdragon S4.

Behold, computing power with a reckless and gleeful disregard for utility:

As noted, Krait quad-core processors won’t be on the market for several months at least. But with Android making moves towards the desktop and third parties like Motorola and Canonical pushing it along as well, performance is no longer about bragging rights – multi-thread capability may be just as important for your phone as for your PC in the near future. We can’t wait to try out.