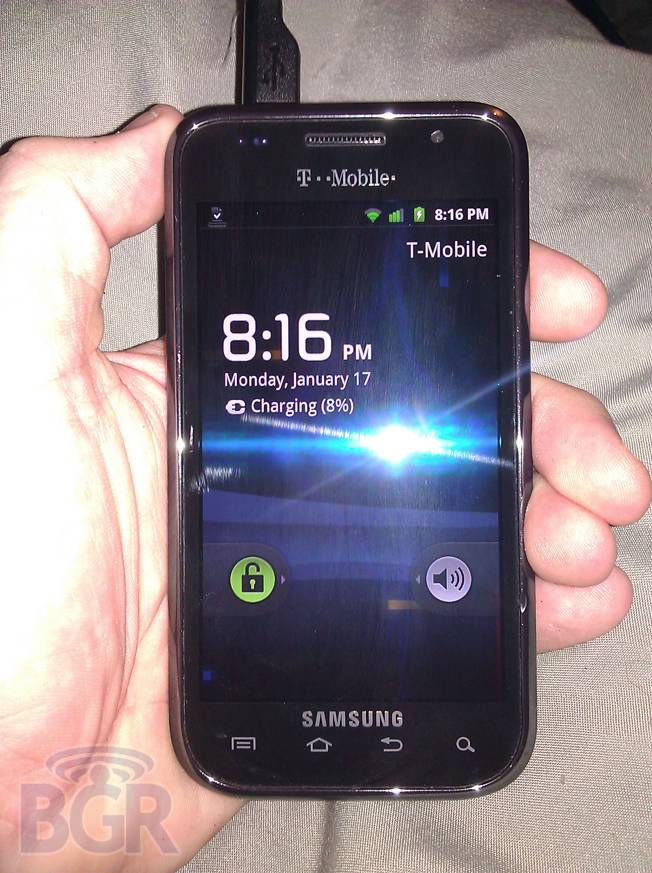 The Samsung Vibrant 4G has been getting a lot of press lately, but not for the right reasons. The device’s feature set should be the focus for potential customers. Instead, suggestive politics and rumors foreshadow this still unannounced device’s upcoming availability. For one unnamed tipster, who managed to get some hands-on time with the device, the next generation Vibrant handset from Samsung is all set to bring T-Mobile’s 4G network to the handset. That, and an unexpected update to the mobile Operating System.

Previous rumors about the Samsung Vibrant 4G pegged the device launching with Android 2.2, or Froyo. However, the tipster who managed to take the picture of the device in their time with it, says that the handset is indeed running Android 2.3, or Gingerbread. The picture clearly shows the familiar tell-tale signs of Gingerbread, with the green-fused indicators within the notification bar.

Of course, the device could be running a ROM, or Samsung may just be changing things up in this early build of the handset. We know it’s an early build, because the tipster says that Samsung is working on adding their proprietary TouchWiz (3.0?) interface to the handset. In the picture though, we see “vanilla” Android 2.3. Further points of interest in the baked ROM department: the inclusion of the PM in the time slot. That doesn’t show up in an actual, standard 2.3-based device, and is usually added in ROMs. Can anyone else point out the differences between stock 2.3 and the version above?

As for the device’s feature set, the Vibrant 4G will take advantage of T-Mobile’s self-titled 4G network with the 21Mbps HSPA+ radio on board. It will have a 4-inch Super AMOLED capacitive touchscreen display. Further details about the Vibrant 4G haven’t been confirmed, but there’s suggestions that the 1GHz Hummingbird processor will once again make its presence known under the hood. There’s a front-facing camera for video chats.

[Update] All right, looks like we can probably call this image a fake. As BriefMobile has pointed out, there’s plenty of “what ifs” in here that just can’t be ignored. They also pointed out that the PM was included in the time, as we did above, but they also point out that the device has WiFi turned on, meaning a 4G indicator wouldn’t have to be preset. Furthermore, this device is using an old Android 2.2-based icon for successful download of an application, instead of a 2.3 icon.

Like we said above, this could just be the transition for Samsung as they add their TouchWiz User Interface (UI) to the device, but we doubt it. This looks like an original Vibrant device with a front-facing camera mod. So, the rumors about the handset launching with Android 2.2 under the hood are still on track, it seems.