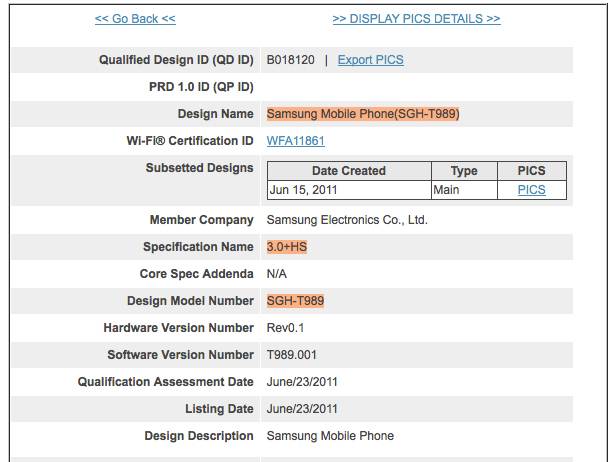 We all know Samsung is planning to launch the amazing and high end Samsung Galaxy S II soon here in the states. With leaked roadmaps showing the SGSII coming to U.S. markets soon and even Samsung’s own Facebook page showing a AT&T Galaxy S II. So what is this that is passing bluetooth certification?

Could this be the Galaxy S II, or maybe even the Samsung Hercules we told you about recently? Leaked information like the above Hercules link and other details regarding a T-Mobile Galaxy S II make us believe this is either the T-Mobile SGSII or it could in fact be the Samsung Hercules, and heading to T-Mobile soon as it’s already starting to pass things like bluetooth certification.

The device is listed as the Samsung T989 and so far we don’t know much else regarding this phone but it could also be a new version of the Galaxy S 4G or Samsung Vibrant as they had very similar model numbers. I’d love for this to be the rumored Hercules because it had a beastly set of specs anyone would love to get their hands on. Things like a 4.5″ AMOLED Display, dual-core CPU, Android 2.3 and more. Sounds pretty nice right? Stay tuned right here for more information about the Samsung T989 as it comes in.