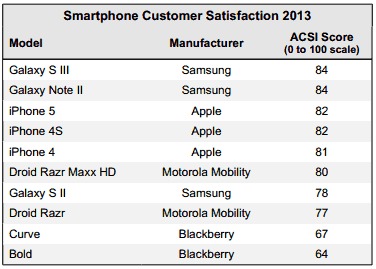 Perhaps Apple was onto something when it set its cross-hairs on Samsung when it took the latter to court last year. Because now it turns out that two of Samsung’s smartphones topped a customer satisfaction survey, beating out three Apple iPhones.

There are some caveats, though, to the ACSI research. The study was done when Apple’s iPhone line is due for a refresh. Although to be fair, it was also done just before the release of Samsung’s Galaxy S4. This is also the first time the ACSI targeted individual smartphone models and as such, there is no previous data to compare it to. The group intends to do the survey annually and the future results might be more telling.

The survey may not affect Apple fans, who are unsurprisingly found to be more loyal to brand than Android users are. It does, however, reflect changes in market trends. Recent figures have revealed that Samsung continues to dominate the smartphone market, with Apple in second place. And even in the tablet arena, Apple continues to lose ground to Android device manufacturers, with Samsung right at the top.