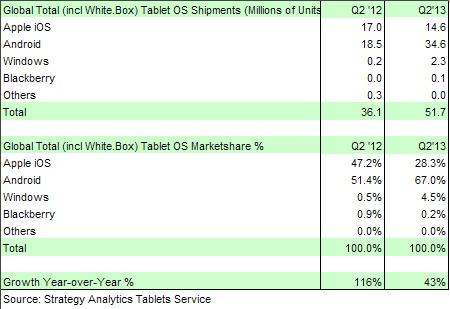 Android has steadily risen to become the king of the hill of tablet devices, a position once solely enjoyed by Apple’s iPad line. A recent study done by Strategy Analytics revealed that Android tablets have eaten away at Apple’s pie of the tablet market, getting a solid foothold of 67 percent in the second quarter of 2013. Apple declines to 28 percent while Microsoft falls a 4.5 percent.

The shipment of branded tablets like those from Samsung, Amazon, or Google grew by 47 percent from last year’s 24.6 million units to 36.2 million units. Adding shipments of white-box tablets, or those tablets that are produced by one company and taken by another company to rebrand and sell off as their own, the total figures showed a growth of 43 percent from 36.1 million in Q2 2012 to 51.7 million this year.

On the other hand, shipment of Apple’s iPad declined by 14 percent to 14.6 million units in 2013’s second quarter. Strategy Analytics Director of Tablets Peter King explained that the decline in sales could be explained by the fact that there have been no new tablet models in the quarter. The iPad Mini, which was only released late last year, was expected to raise the figure beyond 14.6 million.

King also said that there was a rest period for branded tablets as few products were released during the quarter. Even so, Android is making steady progress in the market. Even white-box tablets are doing quite well, even with branded OEMs aggressively lowering prices.