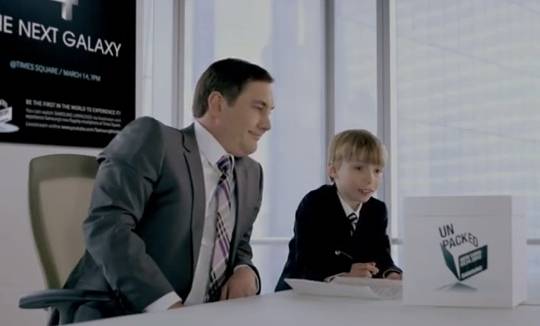 We know Samsung will be announcing the Galaxy S IV on March 14, however aside from rumors, leaked benchmarks and other unofficial details, there is not much that is officially known about the handset. Samsung has recently dropped a teaser video ahead of the Unpacked event, however it keeps to the point of being a teaser. In other words, it builds some additional hype without revealing any additional details.

This video introduces Jeremy Maxwell as he takes a secret meeting with Samsung. In the video, Jeremy is given a box which presumably holds the handset. He then, after signing a form saying that he would not share any details, proceeds to head home to where he is seen by Jane who is trying to get the scoop on what is inside the box. Basically, if you were hoping for any details, this video will disappoint.

Otherwise, the video measures in at roughly 1 minute and 20 seconds and ends with the “to be continued.” No mention as to when we can expect the next installment to arrive, however with the official announcement coming on March 14, we do know that Samsung likely will not wait all that long. In addition to having the press version of the announcement, Samsung will also be holding an event in Times Square that will be livestreaming the announcement.

With that, based on the latest rumors, we are now looking at a handset that will be available in black or white and with storage options of 16, 32 or 64GB. The remaining specs look to include a 5-inch Super AMOLED display, 2GB of RAM, microSD card slot, 2 megapixel front-facing camera, 13 megapixel rear-facing camera and Jelly Bean with the Touchwiz user interface.