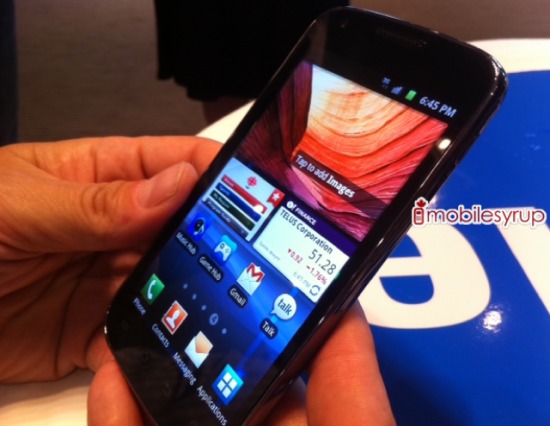 We have heard the name Samsung Hercules more than a few times. Original reports suggest the Hercules will be the Galaxy S II variant for T-Mobile with a large 4.5″ screen. It appears to have been spotted in the wild running on TELUS and from first glance the hardware looks stellar and I want it already.

We did see a Samsung device recently clear the FCC that might be the Hercules so it might be coming sooner than we expect, with photos like the above starting to appear that is only a good sign. Mobile Syrup caught the device running around with its 4.5″ screen and 1.2 Ghz dual-core processor so things are adding up nicely with previous reports.

They mention the hardware is great and it looks like a mix between a Samsung Galaxy S II and the Nexus S, that combination sounds awesome to me and with that 4.5″ screen you can’t forget the Infuse 4G either. Our sources do mention the stock 480×800 resolution on board but we are hoping their eyes are deceiving them, I’d hope for a higher resolution on that big of a display.