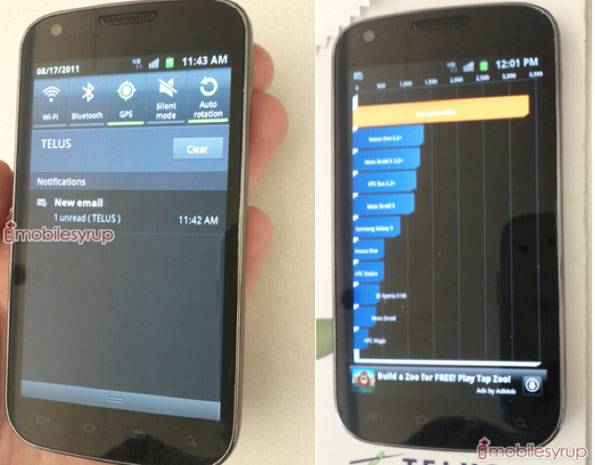 The popular Samsung Galaxy S II aka Hercules for Telus has showed its face again today and this time we get a view of some impressive benchmarks to go with it. One of the first Samsung Hercules shots we’ve seen was also a leak running on Telus and tonight it’s no different. This is another clear picture of what to expect in the Hercules and it looks like the Nexus S and Galaxy S II combined into one beautiful device.

These photos were spotted by MobileSyrup who was lucky enough to catch the Hercules running around in the wild. Also pictured are a few benchmark results showing some impressive numbers to say the least, it scores a solid 3300+ from what we are seeing initially. This 4.5″ screen packing 1.2 Ghz dual-core device sure looks better each time we see it and I can’t wait for the T-Mobile version to arrive.

Those impressive benchmark results make me think this may be rocking the Samsung Exynos chip rather than the Qualcomm but at the moment exact details are still a little hard to come by. We have heard and seen so many different variations over the past few weeks that this could be either or. Would you rather have the original Galaxy S II with a smaller screen and the dedicated home button? Or do you like this 4.5″ screen flavor rocking the usual Android capacitive buttons? Either way I just can’t wait for it to arrive so I can get my paws on it.