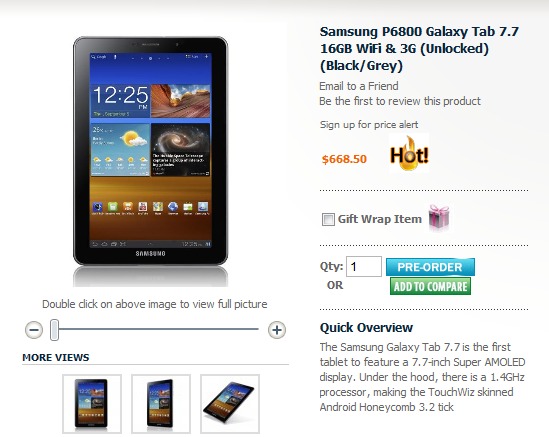 Who remembers the awesome looking Samsung Galaxy Tab 7.7? The first tablet to feature Samsung’s Super AMOLED HD display technology that was first spotted at IFA but quickly went missing. For a quick refresh you can start by looking over our Tab 7.7 hands-on because it’s one impressive tablet. Apparently the Tab 7.7 should be launching soon and is up for pre-order unlocked with 3G and ready to go.

The Galaxy Tab 7.7 is the first slate to feature the impressive Samsung Super AMOLED display on a large screen size like 7.7″ and we’ve been patiently waiting for more details on this tab. Running with a 1280 x 800 resolution and rocking a powerful 1.4 GHz dual-core processor I’d love to get my hands on one of these. It’s under 8mm thin, has built-in 3G and should have some stunning colors on that vivid AMOLED panel.

Back in September the 7.7 hit the FCC but that was the last we’ve heard of it. Current legal battles with that fruit company could be to blame but at this point we aren’t fully sure where the delay is being caused. It could also be a shortage of those AMOLED panels too. According to our friends at oled-display.net Samsung is ready to go and the tab is all set for launch. It is even being offered up for pre-order by a few popular online retailers such as Negri Electronics (who recently gave Twitter followers a free Galaxy Nexus).

While we still don’t have anything official from Samsung regarding the Galaxy Tab 7.7 or when/if it will come to the states it’s nice to hear an update. According to Negri Electronics it is fully 3G GSM unlocked and will run you a pretty $670 USD outright. We should see lower prices on-contract if we ever get the pleasure of enjoying this slate in the US.