At Google I/O earlier this week, every attendee got to walk away with a limited edition Samsung Galaxy Tab 10.1 tablet. We reviewed the slate and compared it with the Motorola XOOM and the LG G-Slate and we even did an epic unboxing battle to which you can vote a winner for a chance to win the limited edition tablet. And what’s even better? Now we get word that the ultra thin and lightweight tablet may be heading to Verizon as its first carrier and sport speedy 4G LTE.

The guys over at DroidLife were tipped with some Verizon inventory screen images that showed four mystery SKUs with model numbers and specs that suggested they may be the Samsung Galaxy Tab 10.1. The tablet is listed as SCH-1905 which falls inline with Samsung’s typical model numbering and looks to be coming in both white and black as well as in two storage capacities of 16GB and 32GB.

In a second and third image we can see clearly that the SKUs in question will come running Android 3.0 Honeycomb and be a 4G LTE tablet. Currently, there are no details on when this device would be ready, but since Samsung has scheduled a big press event for May 26th, it’s highly possible that a Verizon 4G LTE Samsung Galaxy Tab 10.1 slate gets unveiled then. 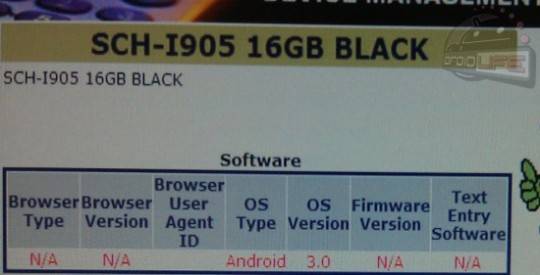