Which one of these things is not like the other – which one of them does not belong? Any lay-person looking at the three tablets in this odd stack up might say the Galaxy Tab 10.1 on account of its white color and custom-etched backing, but look at that little weirdo. The LG G-Slate is one of the latest dual-core tablets to be released in the USA and it’s ever-so-slightly smaller than the other two here in this stack-up. It’s also got a 3D camera. That’s pretty weird. And what about that Motorola XOOM? It’s what, several months old. Shouldn’t it be extinct by now? Hardly. Behold this week’s ultimate battle to the death, Google I/O 2011 style.

Below you’re going to see some specs all stacked up, and indeed this may be the way you end up comparing these three titans, but know this – only you can decide what feels best for what you need your tablet choice to do, and all three of these devices certainly have some bigtime unique features going for them. In short, let’s have a look at each of them, several of these items revealing themselves as recently as yesterday morning at the first keynote at Google I/O 2011. 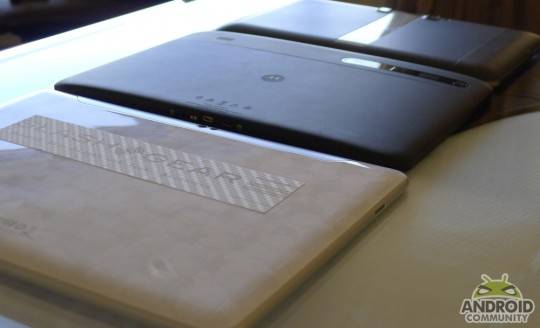 LG G-Slate: This tablet has the smallest display of the three at 8.9 inches, it’s got a 3D video camera on its back via what amounts to literally 2 cameras shooting at once. It’s certainly not the thinnest of the three devices, though perhaps not the thickest, coming in very close to what the XOOM has to offer for being… let’s say robust.

Motorola XOOM: Like the other two devices, the XOOM runs Android 3.0 Honeycomb. On the other hand, it’ll be the first device in the world to officially be running Android 3.1, a newer iteration of the tablet-based mobile operating system with a fresh set of functions such as widget resizing.

Samsung Galaxy Tab 10.1: It’s free! Free for attendees of Google I/O 2011, that is, a special white edition with Android-army etched back. This device is by far the thinnest and the lightest of the bunch and is set to be running Samsung’s TouchWiz UX by the end of the year – that’s not a promise, but a fish smells like a fish.

Now on to the specs. After that a collection of photos that’ll make it clear which device you’ll be wanting straight from Vincent who’s hanging out with Ben and Daniel in a hotel room over there at the big event, just tap tap tapping away at some computers and so forth. For the rest of our coverage of Google I/O, hit the big [IO 2011 Portal]