The leaks and rumors have yet to reach that overdrive status, however it does appear as if we are seeing more and more mentions of the Samsung Galaxy S5. There has been talk of the handset having a metal frame, 16MP rear-facing camera and even a 4000 mAh battery. And as of today, a GFX Bench filing has been spotted for the SM-G900S, a device that is believed to be the Galaxy S5.

The important part to remember here, the SM-G900S is believed to the the Galaxy S5. With that distinction made clear, it does appear the Galaxy S5 will bring a decent set of specs. The listing begins with mention of Android 4.4 Kit Kat, which given the timing, isn’t as much of a surprise, but more of something we would expect and/or hope to see.

Looking further and there was mention of Adreno 330 graphics and a display resolution of 2560 x 1440. Earlier leaks have suggested the Galaxy S5 display size would measure in at 5, or 5.2-inches. Or in other words, that means a potential PPI of well above 550. Also, while not mentioned in this filing, there has been talk of the Galaxy S5 arriving with 4GB of RAM. 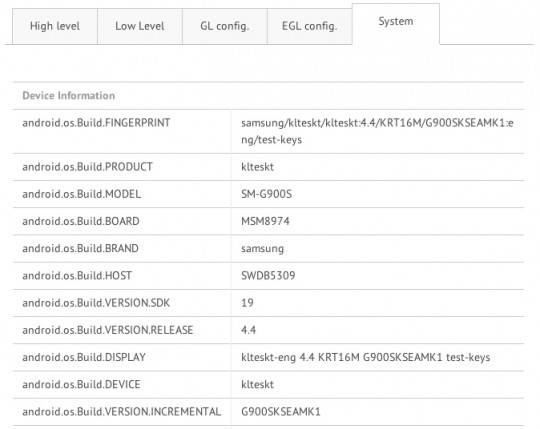 That 4GB of RAM would be paired with an MSM8974 processor and while it doesn’t list which Snapdragon model specifically, this could be the new Snapdragon 805. Details from the filing show it running at 2457MHz, which would have us looking towards the 2.5GHz mark. Or more to the point here — that is above the 2.3GHz mark where the Snapdragon 800 sits. 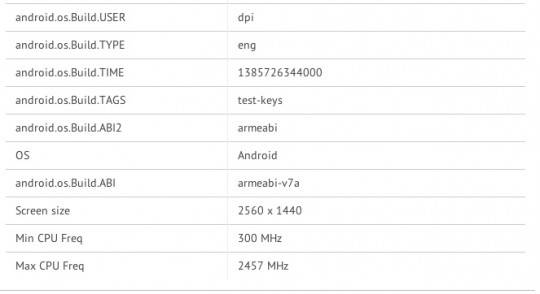 Of course, as we have seen with other Samsung devices in the past, the Galaxy S5 is likely to arrive with a different processor based on the market. All that having been said, this is still early days for Galaxy S5 rumors so we are sure these details will change and evolve over time. But for now, it looks like the handset is shaping up to be a powerhouse.