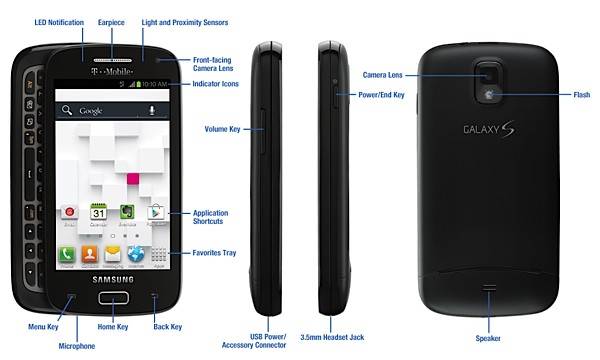 Samsung and T-Mobile have partnered yet again to release another budget friendly handset to the market. Previously known as the Samsung Galaxy S Blaze Q, the new and upcoming Galaxy S Relay 4G (gasps for air) is the official name and we have a full 360 degrees view of the phone now. Head down past the break for more info.

This little slide-out QWERTY keyboard rocking dual-core phone is set to arrive on T-Mobile soon, although we don’t have all the details quite yet. Paired with Android 4.0 Ice Cream Sandwich and decent hardware similar to a mini Galaxy S III with a keyboard this should be a nice phone.

The Galaxy S Relay 4G comes with a 4-inch display (not 720p HD) and the same 1.5 GHz dual-core Snapdragon S4 processor as the Galaxy S III and many other smartphones as of late. This ‘faux’ 4G device from T-Mobile was originally rumored to launch around the 15th of this month, but sadly that date has passed by without a peep from either side.

Unfortunately we still don’t have a full 100% list of specs, but have basically confirmed all the details outlined above, not to mention the picture shows us plenty. The new Galaxy S Relay 4G might still have a terrible name, but the phone isn’t half bad. Stay tuned as we wait for an official announcement from T-Mobile or Samsung.