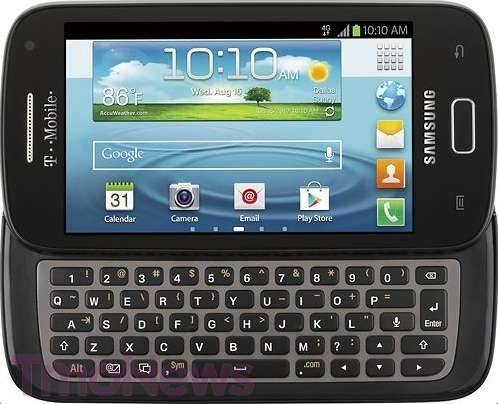 A press image of a new Samsung Galaxy device headed to the folks at T-Mobile has appeared, and along with it comes decent specs and a QWERTY keyboard. The ridiculously long name is the T-Mobile Samsung Galaxy S Blaze Q and we are even hearing this device could launch as soon as August 15th, but that looks pretty unlikely at the moment.

Motorola recently announced the PHOTON Q 4G LTE QWERTY slider for another carrier, and now T-Mobile and Samsung are following suite with a similar option. Adding Q in the name to signify a QWERTY hardware keyboard just like their myTouch Q. If you ask me, these long names are starting to get out of hand.

Back to the device though, the Galaxy S Blaze Q looks to be an overall mid to high-end smartphone for T-Mobile, and we first spotted it back in June. This appears to be a slightly improved Galaxy S Blaze 4G, only with a keyboard of course. The specs include a 720p HD display of unknown size (likely 4.0 inches) and the same 1.5 GHz dual-core Snapdragon S4 processor as the powerful Galaxy S III. It features 1GB of RAM, 16GB of storage, and Android 4.0 Ice Cream Sandwich is on board too.

Then on bottom is the 5-row slide out QWERTY keyboard that most either love, or hate. We don’t have any further details but being mid-range it will most likely offer a 5 megapixel rear camera too. T-Mobile seems to still be big supporters of the hardware keyboard, and this will make an excellent budget friendly back to school smartphone should they release it this month. We’ll be hearing more soon so stay tuned.