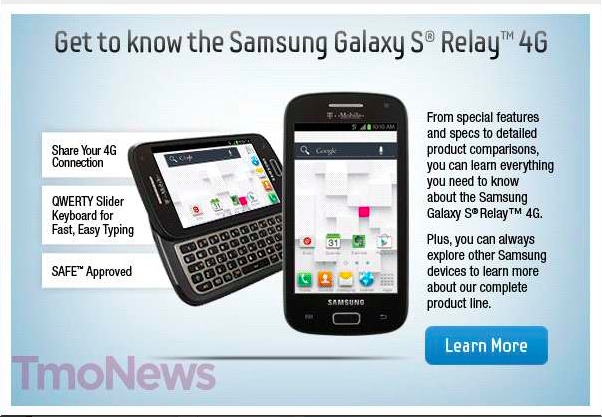 We’ve been hearing rumors that the Samsung Galaxy S Blaze Q was undergoing a name change, but today we may have just received confirmation. TmoNews has unearthed some Samsung training documents that show the Galaxy S Blaze Q, but this time around it has a different name: the Samsung Galaxy S Relay 4G. It would appear that the Blaze Q has indeed been re-branded, but Samsung has yet to make an official announcement on the switch.

The Galaxy S Relay 4G comes equipped with a slide-out QWERTY keyboard, a 4-inch display, and a 1.5 GHz processor. TmoNews reports that we don’t actually know what kind of processor the Relay 4G comes with, but they’re guessing it’s an S4. The Relay 4G comes with Ice Cream Sandwich installed, mobile hotspot capabilities for up to 8 devices, and has NFC and (obviously) 4G functionality.

The Relay 4G was originally thought to be launching this week, but with its expected August 15 release date now in the past, that doesn’t seem to be the case. Now it looks like we’ll have to wait for further confirmation from Samsung before the phone eventually arrives at T-Mobile. Perhaps the name change was the reason for the no-show?

All in all, the Galaxy S Relay 4G seems like a pretty solid device, as long as you can past the silly name. We’re not sure which name is worse, but we’re positive that both names are pretty bad. Regardless of the name, however, it should be arriving at T-Mobile soon, so if you require a slider that still sports some respectable specs, this might just be the phone for you. Stay tuned to Android Community, because we’ll have more information on the Relay 4G as it becomes available!