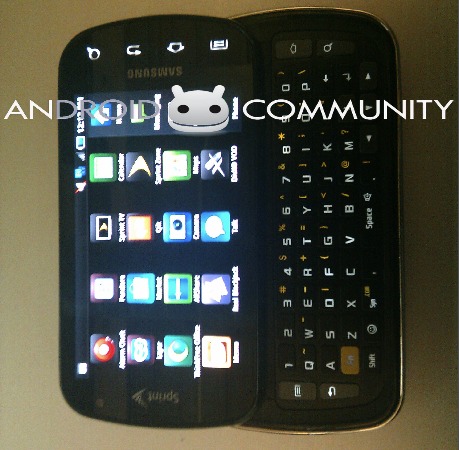 We know the Samsung Galaxy S Pro is coming to Sprint, and we know what it looks like; up until now, though, all we’ve had is conjecture as to what, exactly, is going on inside the slider-chassis.  According to Android Central‘s tipster, however, it’s a 1GHz Samsung/Intrinsity ARM Cortex A8 CPU doing the hard work, with 512MB of RAM and 8.2GB of ROM, EVDO Rev.A and WiMAX.

There’s also a Super AMOLED capacitive touchscreen display – which is tipped at around the same 4-inches as the Galaxy S, unsurprisingly – WiFi b/g/n and, interestingly, a SIM card slot which suggests a world-phone version may be on the cards.  As for the keyboard, the slide “is very smooth and clicks in place when closed. The keys are raised, made of soft plastic. They’re pretty firm when pressed.”

As for software, there’s plenty of time for Samsung to tweak things but it’s Android 2.1 with TouchWiz 3.0 like we’ve seen in the leaked images.  Still, this is one of the more interesting devices of 2010, and having played with the brilliant Galaxy S – our review of which will be up later this week – we’re certainly keen to know more.