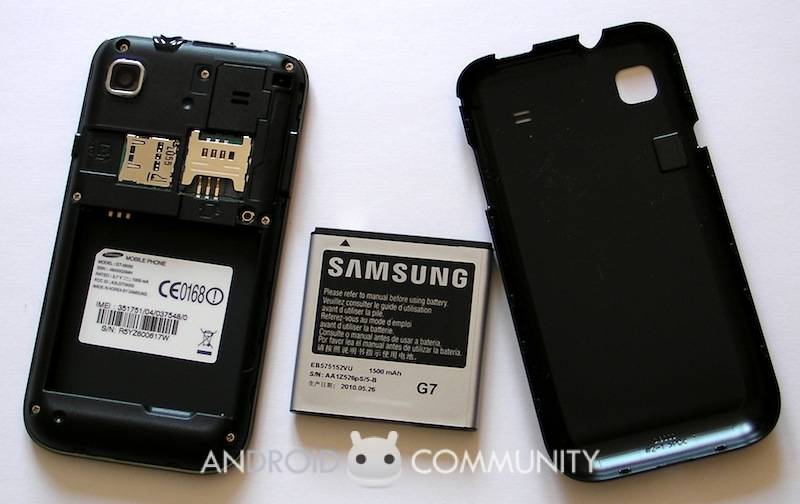 There’s a Samsung Galaxy S in the house, and we have to say we’re excited.  Samsung’s first Android smartphone to use their Super AMOLED technology is quite the pocket powerhouse, with an indecently bright, crisp WVGA capacitive touchscreen and the company’s 1GHz Hummingbird processor keeping things swift.  Check out our exclusive unboxing video, walkthrough and some first impressions!

To kick off, just a recap.  The Galaxy S (I9000) has a 4-inch WVGA display, triband HSPA, WiFi b/g/n and Bluetooth 3.0, along with a 5-megapixel autofocus camera, front-facing camera for video calls, Android 2.1 OS and Samsung’s own TouchWiz 3.0 UI.  There’s also 8GB of integrated storage (on this particular unit; Samsung also offer a 16GB version) together with a microSD card slot for up to 32GB more, plus USB 2.0 and support for DivX, Xvid, H.264 and MPEG-4 video playback.

In the hand, it’s deceptively light.  Bar a slight bulge at the base of the Galaxy S at the back it’s also pleasantly thin, though it’s very obviously plastic rather than metal.  Still, there are no creaks when you squeeze it.  Hardware controls are limited to menu, home and back along the bottom of the display, with the power key on the right-hand side and the volume rocker on the left; up top is the 3.5mm headphone socket and a microUSB port under a sliding door.

Of course, the most striking aspect comes when you turn the Galaxy S on.  We were impressed with the company’s Super AMOLED display technology when we reviewed the bada-powered Samsung Wave recently, but at almost an extra inch in size the Galaxy S’ screen is simply beautiful.  Colors pop, contrast is great, and it almost feels as though the display is laying on top of the phone rather than being set into the chassis as on other phones.  It’s paired with a responsive capacitive touchscreen layer, too.

If the display impresses, the speed through which the Galaxy S moves through menus and webpages is equally satisfying.  Rendering is nigh-on instantaneous while pinch-zooming lacks any of the lag we’ve seen sometimes affect other Android devices.  Similarly screen rotation is quick, and while there’s no Flash support as yet we haven’t really missed it.

Samsung’s TouchWiz UI is certainly colorful in its third iteration, though we’re still not 100-percent convinced by it over, say, HTC Sense or even the basic Android UI.  We’ll be putting the company’s Social Hub through its paces too: it promises to bring together Twitter, Facebook and MySpace into one easily checked, easily updated place.

Until the full review, check out the unboxing video and demo, and enjoy the gallery.  Don’t forget to ask us any questions you might have!