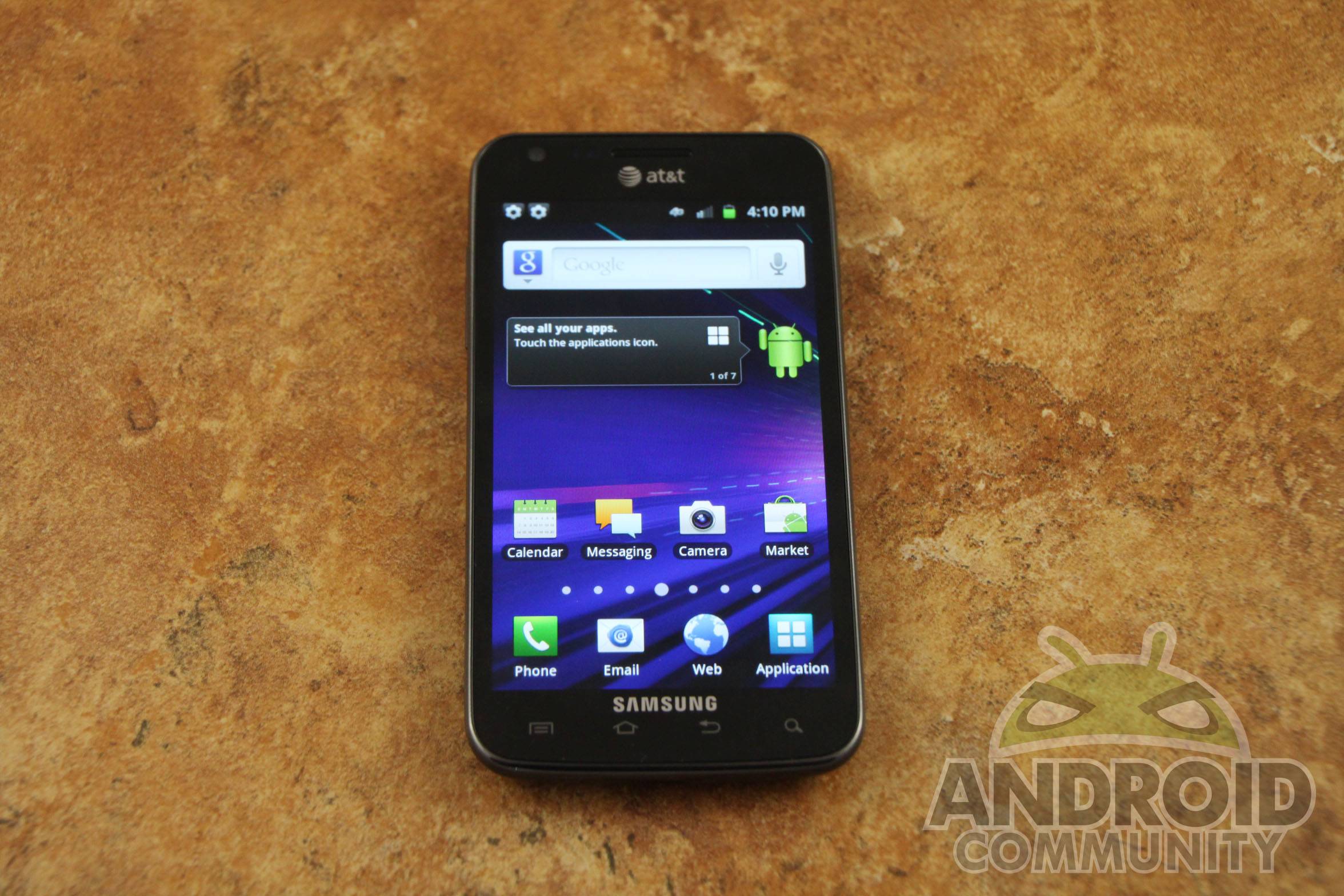 Dying to get on the AT&T LTE bandwagon, but prefer your phone to have some Samsung wizardry instead of HTC sensibility? Then take a look at the Samsung Galaxy S II Skyrocket. This offshoot of the Galaxy S II is one of only two AT&T phones to take advantage of the new speeds, along with its launch partner the HTC Vivid. How does it stack up to the competition?

The Samsung Galaxy S II Skyrocket (hereafter referred to as the “Skyrocket”, because I’ve got other stories to write this week) is pretty much exactly what it sounds like: an update to the already solid AT&T version of the SGSII. Notable improvements include a slightly bigger 4.5-inch screen, a bigger 1850 mAh battery, a bump up to a 1.5Ghz dual-core processor, and of course an LTE radio. Otherwise, the Skyrocket looks and feels exactly like its forebear. The construction is quite light (for such a large phone) at 4.65 ounces, though the plastic components feel a little on the cheap side, especially the flimsy battery cover.

Like all Samsung phones as of late, the power button resides on the right side. Check out the left-side volume rocker, a MicroUSB port on the bottom and the headphone port on the top. Lever the battery cover open and you get access to the LTE mini-SIM and the empty MicroSD card slot, which is – yes! – accessible without removing the battery. For those who were wondering, yes, the Skyrocket does have NFC capabilities. Internal storage is a generous 16GB. In the packaging you get your basic wall adapter and microUSB cord, plus a free pair of headphones with an in-line microphone. Thanks, Sammy! 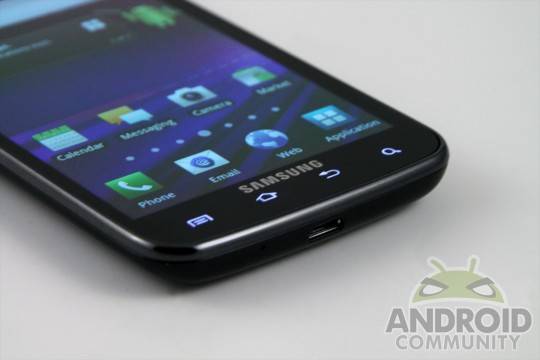 The screen is the Super AMOLED panel we’ve come to respect, but unfortunately Samsung’s gone with the same 800 x 480 resolution as the Galaxy S and S II. Don’t get me wrong, it’s still a great-looking screen, with the expected vibrant colors and awesome viewing angles. But with high-end phones reaching towards five-inch screens, I’d like to see at least a qHD panel (like the Vivid, which unfortunately has a lowly LCD) to take advantage of the real estate. You can definitely notice the lower resolution on a jumbo-sized panel.

TouchWiz phones: if you’ve seen one, you’ve seen ’em all. Samsung’s custom UI is here once again, and if you’re a fan, there’s nothing to dissuade you – except for some strange slowdown on the homescreen and app launcher. It’s really odd: I’ve seen phones with much lower specs handle TouchWiz without complaint, but on the Skyrocket slight jumps and jitters are clearly visible, even with a minimal RAM load. It doesn’t take away from the experience or the generally pretty iPhone-esque interface, it’s just annoying to see this little flaw on a phone with so much horsepower. 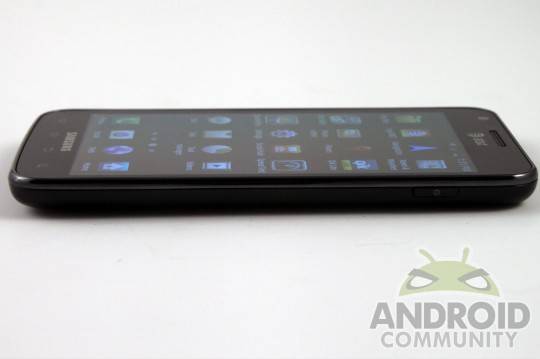 And on just about everything else, the Skyrocket, well, flies. The customized browser scrolls without any issue, switching between apps is fast, even opening up traditionally slow stuff like the camera app or a full software list blazes. And it should: the Skyrocket’s 1.5Ghz processor scored nearly 2500 on the Quadrant benchmark, obliterating the HTC Vivid’s score of 1680. Some quick tests with Wind-Up Knight and Reckless Racing bore it out: this phone is fast. Gamers, if you’re looking for something that will stand up to the latest 3D releases, this is it.

There’s a pretty significant load of AT&T bloatware on the phone, but at least some of it is user-removable. Some of the apps that insist on cluttering up the launcher are AT&T’s QR code reader, AP Mobile, and AT&T Navigator (seriously, why?). None of them seem to be hampering the considerable performance, however. Gingerbread is the main course here, but AT&T has already promised to upgrade the Skyrocket to Ice Cream Sandwich. 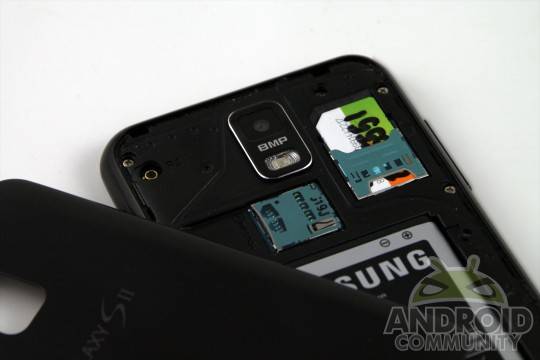 After testing a not-so-nearby AT&T LTE coverage area, the Skyrocket averaged 16-17 megabits down. That’s not as high as we’d like to see for an almost unused network, but it’s more than enough to handle whatever a basic user can throw at it, including high-quality music and video. In those places where LTE is not available, HSPA+ will have to do.

Phone calls were clear and without interruption as long as the bars were full. When I went into my home I’d get between one and three bars, and as usual, I could hear people on the other end of the line, but they often couldn’t hear me. That’s not a dig at the Skyrocket, that’s just AT&T’s coverage in my area – though that being the case, I’m always on the lookout for phones with excellent reception. 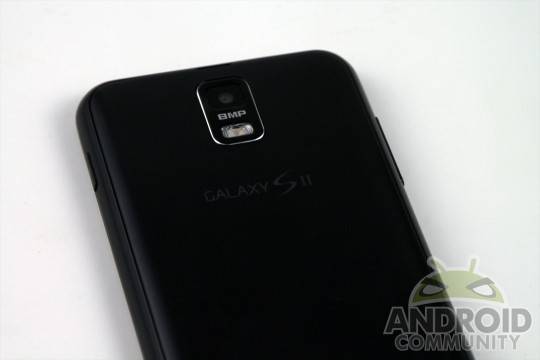 The battery is larger than the one on the SGSII by a good margin, the better to supply that power-hungry LTE radio. Though most of the time I was on HSPA+, the phone lasted all day and through an idle night with 30% battery remaining, a solid showing.

The 8-megapixel camera on the Skyrocket is the same as on the SGSII, a respectable performer in high and medium light situations. Though you’ll definitely get some grain in poorly-lit rooms, it’s a better at stills and video than the one found on the HTC Vivid in every respect. 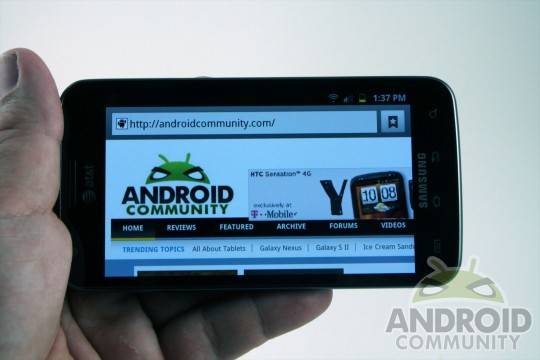 Thanks to that monster processor, video playback was smooth, and Samsung’s TouchWiz editions make audio easy to manage no matter what you’re doing at the time. The rear speaker isn’t the loudest I’ve heard, but it’s far from the softest either, and unless you’re in the habit of listening to music in a loud environment, it’ll serve.

The Samsung Galaxy S II Skyrocket is a worthy successor to the SGSII, and since it’s actually cheaper (for the moment) at $149.99, there’s no reason not to go for it if you’re an AT&T LTE customer. While the screen resolution is a little disappointing and the build quality could be better, it should please just about everyone – except for those who want to save a little dough by going with the HTC Vivid.