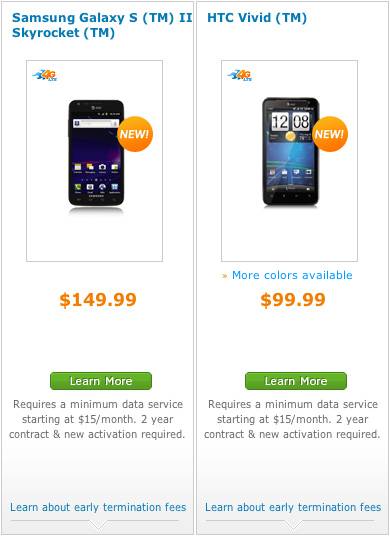 When AT&T announced its first smartphones to take advantage of its new fancy-pants LTE network, a few balked at the $199 and $249 prices for the HTC Vivid and Samsung Galaxy S II Skyrocket, respectively. Well, rejoice bargain hunters: the price for each has dropped by a cool $100. That makes the Vivid just $99.99 and the Skyrocket $149.99 – not bad for a pair of phones with specs that are just shy of the top of the line.

AT&T didn’t give a reason for the price drop, but it’s likely that a lot of people weren’t thrilled at the prospect of paying a considerable premium for LTE. After all, the LTE portion of the network still only  extends to a handful of metro markets, and if you don’t live in one, a modest bump up from other Android phones like the Galaxy S II and Inspire 4G doesn’t really warrant the increased price. Curiously, the reduction makes the Galaxy S II Skyrocket $50 less than the plane-Jane version of the Galaxy S II. If you’re an AT&T customer who wants a GSII, there’s no reason not to go with the Skyrocket.