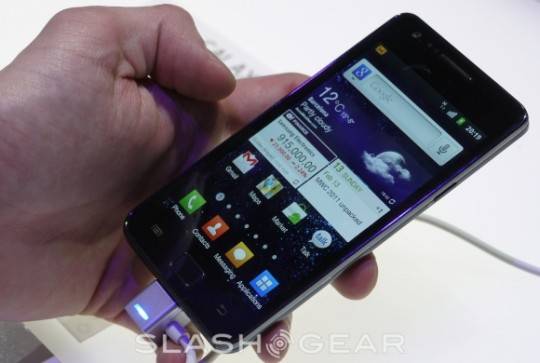 The Samsung Galaxy S II has been official for a while, we all have probably seen its beauty by now. It is Samsung’s next flagship device that is set to sell as many as the first Galaxy S did or more. Today we have a little leak of a prototype Galaxy S II. It comes in the form of a 720p HD video and full walk-through from some friends over in the Ukraine.

In case anyone has forgot I’ll mention a few specs just to be nice (plus video isn’t in English), the S II features a 4.3″ AMOLED Plus display, 1 Ghz Dual core CPU, 8 MP camera, full 1080p HD video capture and still manages to stay extremely thin. I also want to note the dual core 1 Ghz CPU is Samsung’s own chip, but there is also reports by Nvidia that some Galaxy S II Phones will ship with Tegra 2 CPU’s instead. Both are very powerful so that doesn’t sound so bad.

Before I post the video feel free to check out our sister site Slashgear doing their own hands-on of the S II. Like I said above, the video and the source link are not in English but it’s still a great HD video showing plenty of the sexy hardware on the Galaxy S II, with tons of photo’s at the source. Oh and Google Translate will be your friend for this one.