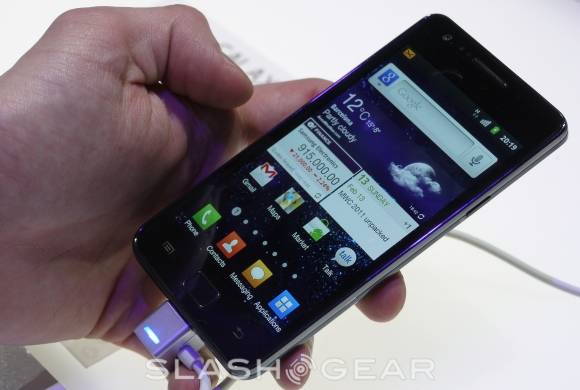 The gang at SlashGear got a hands-on with the Samsung Galaxy S II recently. As you recall, Samsung set record sales revenues in 2010, driven by Android devices like the original Galaxy S. So, with part II, it’s safe to say that Samsung isn’t resting on their laurels with this attractive sequel. Here’s what stands out …

Thanks to it’s killer specs: 4.27-inch Super AMOLED plus display, 8 megapixel rear facing camera with 1080p full HD recording and dual-core 1Ghz processor, the Galaxy S II is seamless, narrow and fast. The Super AMOLED screen is seriously crisp and vibrant in color and clarity. Running Gingerbread in concert with TouchWiz 4 on top, the interface has gotten more mature and easier to navigate through. In addition to giving TouchWiz a nip and tuck, Samsung is also planning to incorporate media “hubs” for entertainment, movies, gameplay and more. The Galaxy S II will arrive in Europe and Asia later in the month. Sadly, the US won’t get to play just yet.